One of the vehicles transporting the Israeli force, according to Hamas 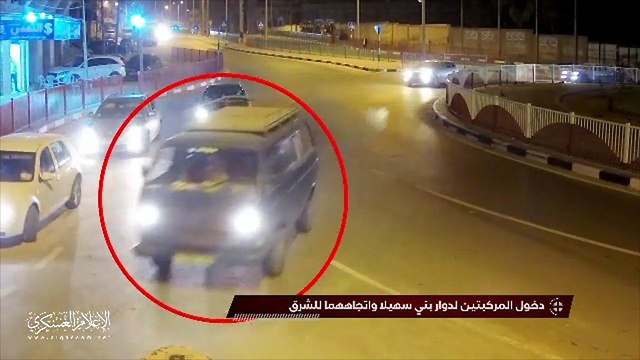 The footage was part of a pre-recorded TV statement by the organization's military wing, the Izz ad-Din al-Qassam Brigades, which also presented photos of drills, chain saws and two pistols with silencers that the Israeli force allegedly used in the raid.

Video released by Hamas about the raid
X

Video released by Hamas about the raid

Qassam Brigades spokesman Abu Obeida said the Israeli forces had attempted to install equipment to monitor the landline communications network used by the militant Palestinian factions in the strip, but that Hamas had thwarted the attempt to "plant spying devices in the Gaza Strip."

The IDF has not released any details about the operation which went awry November 11, leading to the heaviest round of cross-border fire, including Hamas rockets and Israeli airstrikes, since the 2014 Operation Protective Edge.

One of the vehicles transporting the Israeli force, according to Hamas
The Hamas statement described an Israeli mission that allegedly spanned close to a year. Abu Obeida said Israel brought equipment and vehicles into Gaza through a commercial crossing point between January and October. Fifteen members of the unit entered Gaza on a foggy night through the perimeter fence a few days before November 11, the spokesman said.

Pistols with silencers Hamas says were used by the Israel force
A woman working with the Israeli unit entered Gaza several times, disguised as an employee of a humanitarian organization, the spokesman said. Members of the unit used forged IDs of local Gazans and the documents of a charity group, he added.

On November 11, during what Israel said was an intelligence-gathering mission, the unit was detected by Hamas fighters as it traveled in a pickup truck and an old Volkswagen Transporter van near the town of Abassan in southern Gaza.

The discovery sparked a firefight, in which Lt. Col. M. and two Hamas fighters, including a local commander, Nour el-Deen Baraka, were killed. Five other fighters were killed in airstrikes as Israeli aircrafts provided cover to airlift the force, including the dead officer.

In the televised statement, Hamas showed low-resolution surveillance camera footage purportedly showing two vehicles being used by the undercover squad. The footage showed some faces of the occupants of the vehicles and what Hamas said was the moment its gunmen searched the van.

According to the Hamas investigation, the firefight began when Baraka, mid-level commander in charge of the Khan Yunis area, ordered the detention of the occupants of the van who then shot him with silencer pistols. In the exchange of fire, Lt. Col. M. and another Hamas fighter were also killed before the van sped away.

The footage released by Hamas shows the route the force took along Salah Street and in the streets of the town Bani Suheila. Lt. Col. M. is seen in the video talking on the phone.

Another video shows Baraka's vehicle following one of the force's vehicles, while a different clip shows Hamas fighters checking one of the vehicles and questioning its occupants.

Hamas also released footage from a grocery store in the Strip, where the force's members were allegedly spotted buying groceries.

Another clip shows the Israeli force evacuating its wounded before fleeing the area toward the Israeli border.

Hamas also released the picture of full name of Lt. Col. M., which have been barred from publication in Israel by the IDF censor.

Hamas promised a million dollars to any local "collaborator" who would turn double agent and supply it with information about the operation.

On Tuesday, Hamas said it had arrested 45 Gazan "collaborators" with Israel following the Khan Yunis incident.

Hamas had already published photos of eight people and two vehicles it said were linked to the operation, prompting the IDF censor to appeal to the public and media not to republish the images.

AFP and Elior Levy contributed to this story.