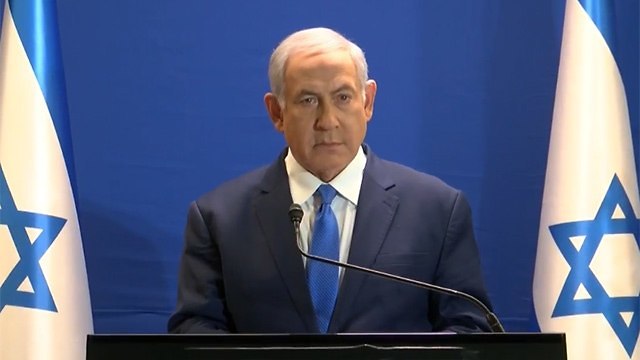 The death rattle of Netanyahu's premiership

Opinion: The prime minister's new lawyers were probably none too pleased with his 'dramatic speech' last week, when he tarred and feathered his predecessors, bringing up Sharon and Olmert's past legal woes in a desperate attempt to save himself.

Israeli author Amos Oz, who passed away this month, left us not only with canonical books about our lives here in Israel, but also razor-sharp insights about the characters that accompany us. And so, after Netanyahu's defeat in the 1999 elections, Oz used a wonderful metaphor when he summed up Netanyahu's three years in office: "On the day after the elections, the air compressor under my window stopped making a noise. All of a sudden, there was silence." Well, over the past 10 years, Netanyahu's air compressor has just kept on humming.

And then came Netanyahu's "dramatic speech" on TV last week, and all of a sudden the air compressor started wheezing and emitting a death rattle. In his desperate attempt to get rid of the dark cloud of indictments hovering over his head, Netanyahu tarred and feathered his predecessors, reminding us of Ariel Sharon's "Greek Island affair" and Ehud Olmert's money envelopes.

Prime Minister Benjamin Netanyahu (Photo: Contact)
How low, how ridiculous. I'm betting his new lawyers were none too pleased with the speech, and if it had been up to them, they would've prevented this performance altogether. As they see it, it's time to make other decisions, ones which will truly determine Netanyahu's fate—a fate that will eventually be determined not at the ballot box, but by the judges in Jerusalem or in a plea deal with the prosecution. Each to his own cases, Mr. Netanyahu—you will have to deal with your legal woes, and your salvation won't come from other suspects' past cases.

If I had to choose the candidate for the title of the air compressor in this election cycle—which seems like yet another season of a reality TV show—I'd undoubtedly give it to Deputy Foreign Minister Tzipi Hotovely. For her appearances on radio and TV, she has certainly earned the title of "constant rattler," talking at the pace of a machine gun, with statements like "the right to remain silent is reserved for defendants on trial," "we have a clear leader," and "Benny Gantz is a leftist."

But Hotovely is not alone. As part of the efforts to undermine Gantz's clean-cut image, Culture Minister Miri Regev warned us of the Israel Resilience Party leader, saying the public is being asked to buy a pig in a poke. If so, it's worth asking: What did we buy in Regev's case?

Before she entered politics, we knew of her magnificent military service, and the fact she was the IDF Spokeswoman during the 2006 Second Lebanon War and enthusiastically defended the 2005 Gaza disengagement—or as her voters today refer to it: the expulsion of thousands of Israeli residents from the Gaza Strip. In truth, Regev is not a pig in a poke—she's a woman for all seasons, who knows how to reinvent herself based on her target audience.

Benny Gantz's positions, his core beliefs, and the solutions he proposes for the ills that plague Israeli society, remain vague. His silence leaves the voter wanting for more: Is he silent because he wants to appeal to voters both on the right and the left, or simply because he has nothing to say?

I want to believe in a third option: Gantz, in his silence, is proposing that we elect him based on his CV. He's telling us he's not an enigma—he has successfully passed all of the tough tests from the day he enlisted in the IDF and until he finished his tenure as IDF chief. No ugliness stuck to him. He's honest, decent, electable. Everything else? That will come when he is required to decide how to deal with the national tasks at hand when they are arrive on his desk.

Where meddlers fear to tread

The warning from the director of the Shin Bet domestic security agency, Nadav Argaman, about the possibility a foreign state will try to meddle in the elections in Israel, has aroused some degree of panic. Well, worry not: the elections will be determined based on the unfortunately rigid worldviews of the majority of the electorate. Foreign meddling is only possible when there's openness to new ideas, and we only have such openness on the margins.

And, generally speaking, there has always been foreign meddling in our elections. It's enough to mention what was dubbed in 1996 as the "Conference to Save Peres," when US President Bill Clinton summoned world leaders to a peace conference in Sharm El-Sheikh on the eve of the elections.

It didn't work: Netanyahu won in the end, because Israelis don't like it when others meddle in their affairs, and because the terror attacks had a far greater impact.

The same will happen this time: It won't be Vladimir Putin or Donald Trump who will crown the next Israeli prime minister. If anyone, it will be Hamas leader Yahya Sinwar.