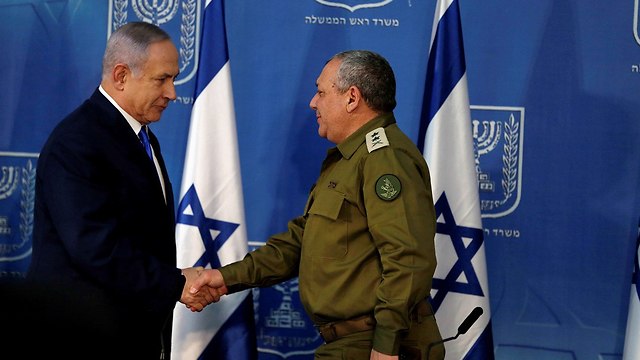 As departing IDF Chief of staff Gadi Eisenkot prepares to take off his uniform on Tuesday, the political echelon and military brass convene at the Kirya army base in Tel Aviv to show their appreciation.

"Gadi, tremendous work has been done in the IDF under your command, and we still have much work ahead," Netanyahu said during a farewell ceremony at the Kirya IDF Headquarters in Tel Aviv.

"We spent countless of hours in Cabinet meetings together, drank numerous cups of coffee together, went out to the field together, visited situation rooms to ensure we can handle any threat and face any enemy on all fronts," he said.

"Gadi, on Tuesday you are concluding 40 years of devoted service in the Israel Defense Forces and four years as chief of staff. During that time, we've thwarted many threats posed to the state of Israel. The IDF operated under your command in an exceptional cooperation with all security forces to prevent Iranian entrenchment in Syria, carrying out hundred of strikes there," Netanyahu said.

"We acted to prevent the manufacturing of precision-guided weapons and naturalized Hezbollah's cross-border tunnels as well as Hamas terror tunnels and lone-wolf terror attack in the West Bank."

If we work to protect our country with all of our might, we can avoid an all-out war, but if needed the IDF can face this challenge, Israel's citizens will face this challenge and together we will ensure the Jewish State's eternal existence," Netanyahu said.

The premier also spoke about the objectives set for the IDF when Eisenkot assumed the post of chief of staff in 2015, which he said were fully met.

“We take leave of you today as IDF Chief of Staff, our military leader and defender of our walls. Soldier, commander, statesman, modest, brave, responsible, a first-rate strategist and a people person. Over the last four years there were no wars, but the IDF under your command never ceased fighting,” Rivlin said.

“You understood the advantages of force no less than the limitations of force. You articulated clearly the difference between the use of military force for the purposes of uncompromising defense and militarism that is a mask for aggression. You taught us strong, stable, responsible, quiet and considered use of military force."

“You were the right person in the right place. I know that you prefer to be out of the limelight but nevertheless, I hope that we will see you in public roles again,” the president said.

Rivlin congratulated the incoming chief of staff, “I want to wish you success, incoming Chief of Staff Aviv Kochavi. The IDF is getting an excellent chief of staff. I am sure that you will succeed in steering the IDF through the challenges ahead with the same determination you have shown so far."

"You are among the best of our people, the best of our commanders. Your success is our success, and we trust you. The outgoing chief of staff is from Golani, and the incoming is from the Paratroopers, but the spirit is the same spirit—of mission, of devotion, of obligation to continue to carry out the duty of defending the State of Israel and the Israeli people in the best way possible. I, like all Israelis, have faith in you. Good luck to you both, and bless you all.”