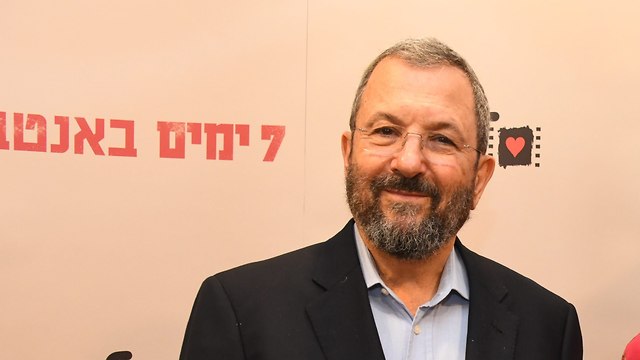 After PM assumed responsibility for Friday's Damascus airstrike, his former defense minister insinuates that his considerations in doing so may have been political, and aimed at the April 9 elections.

A decision by Prime Minister Benjamin Netanyahu and IDF Chief of Staff Gadi Eisenkot to publically confirm Israeli airstrikes in Syria came under fire Monday from senior government members and even a former politician who held both positions himself.

Ehud Barak's criticism came a day after Netanyahu's abrupt admission that Israel had struck hundreds of Iranian and Hezbollah targets in Syria in recent years, including an arms depot over the weekend. It also followed Eisenkot's confirmation to leading news outlets in the US and UK.

Barak, who previously served as Netanyahu's defense minister, told Army Radio that "exposing (the raids) was completely unnecessary" and increased the chances of deterioration in the already tense Middle East. In fact, Barak insinuated, Netanyahu's considerations in ending Israel's ambiguity on such matters may have been political with the prime minister thinking ahead to the April 9 elections.

Israel has traditionally refrained from commenting about its covert activities for fear of triggering a response and of being drawn into the deadly fighting in neighboring Syria's civil war.

Cabinet ministers also criticized Netanyahu on Monday for confirming the weekend airstrike. The members of his government were caught by surprise by Netanyahu's explicit claim of responsibility for hitting an ammunition warehouse at the Damascus airport, and also hinted at political considerations for the move.

The ministers also warned that Netanyahu's remarks might trigger a major escalation on the Syrian and Iranian fronts, as well as make Russia feel insecure over this unrestrained behavior, leading it to take action against the Jewish state.

"(Netanyahu's remarks) do nothing but create provocation. What good does that do?" the ministers said.

Moreover, a senior minister added, "the prime minister made a decision, due to his own considerations, to cede covert operations and that's a shame. This was an asset that we have now lost."

Explosions in Damascus during Israeli airstrikes, January 11, 2019
While this is not the first time Israel has assumed responsibility for air strikes in Syria, the Jewish state has never admitted to attacks carried out under the radar, both for operational reasons and to avoid Syrian retaliation.

Nevertheless, there were those who expressed their support for Netanyahu's actions.

"At this time and under these circumstances, we must maximize our operational activities as a means of pressure against Iran and its proxy Hezbollah," said Netanyau ally Transportation Minister Yisrael Katz.

Other officials also claimed that Netanyahu did the right thing, and that his message, which was directed at Iran, was meant to create deterrence.

The officials said Israel had to signal Tehran that it was determined to prevent Iranian entrenchment in Syria, as Iran has been under the impression that Jerusalem was hesitant to act in Syria following the downing of a Russian spy plane in September 2018.

"There are always considerations for and against revealing Israeli activity abroad," said former national security adviser Yaakov Nagel. Netanyahu's admission "highlights that Israel would do everything in its power to prevent Iran from crossing red lines it has to protect its citizens."