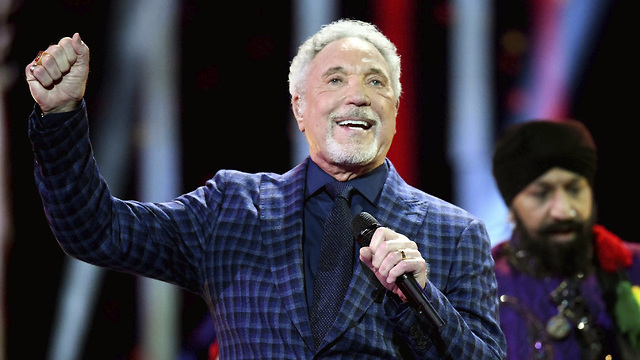 Tom Jones to return to Israel for summer show

The British superstar will perform a concert in Tel Aviv on July 3, 2019; tickets are already on sale, with prices ranging from NIS 275 to NIS 1,350.

Presale for the concert in Tel Aviv began on Sunday for El Al frequent flier card holders, and the general sale began on Tuesday, with ticket prices ranging from NIS 275 to NIS 1,350.

Jones is considered one of Britain's biggest stars, selling more than 100 million albums throughout his career.

His rare voice stood out when he started singing in family gatherings as a child and went on to become the well-known Baritone we all know and love.

Jones' flamboyant style initially made record companies wary, but Britain's small radio stations fell in love with the songs his managers sent them, and he quickly made his way to the mainstream. His big breakthrough came in the 1960s with his first hit "It's Not Unusual."

Jones received a star on the Hollywood Walk of Fame in 1989, and was knighted by Queen Elizabeth II for his "services to music" in 2006.

He continues to perform concerts all around the world, and maintains a charismatic and sexy presence on stage even as he nears his 80th birthday.

In Israel, he is expected to sing some of his big hits, including "Delilah," "Sex Bomb," and "What's New Pussycat."