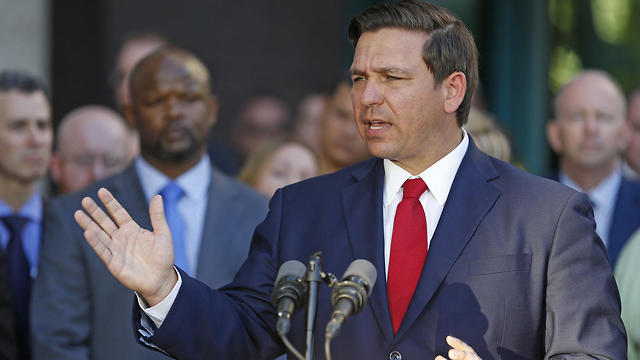 Following Airbnb's announcement in November that it would delist 200 properties and cease its operations in Israeli settlements, Gov. Ron DeSantis calls for sanctions against the online lodging marketplace unless it reverses its decision.

Saying he would “make them feel the heat,” Florida governor Ron DeSantis on Wednesday called for sanctions against Airbnb unless it reverses its decision barring lodging listings in the disputed West Bank in the Middle East.

The Republican governor, who repeatedly touted his views on Israel while on the campaign trail last year, criticized the online lodging marketplace for a policy he said unfairly targets Jewish people.

“We have a moral obligation to oppose the Airbnb policy; it does target Jews specifically,” said DeSantis.

Florida governor Ron DeSantis (Photo: MCT)
Airbnb announced in November that it would delist 200 properties and cease its operations in Israeli settlements “that are at the core of the conflict between the Israelis and Palestinians.” Israel captured the West Bank and East Jerusalem in the 1967 Six-Day War. Today, more than 400,000 Israeli settlers live in the West Bank, in addition to 200,000 Israelis in East Jerusalem. Most of the international community considers the settlements illegal and an impediment to the creation of an independent Palestinian state. Israel sees the territory as disputed and says the fate of the settlements must be resolved in peace negotiations with the Palestinians. DeSantis announced two possible actions against Airbnb: He said the state would suspend the use of Airbnb for state-paid travel, and would consider barring the state’s pension fund from investing in Airbnb, even though the company is not currently publicly traded.

Airbnb logo (Photo: Shutterstock)
The actions announced by DeSantis against Airbnb were just part of the governor’s show of support for the state’s sizable Jewish population, which in the past has been more supportive of Democratic candidates. DeSantis also announced that his first overseas trip would be to Israel in May, and he pledged at least $2 million in state money to Jewish schools for security upgrades. It’s not clear how much of an impact either policy would have on Airbnb, but DeSantis said being on Florida’s “hit list” would hurt the company if it decided to go public. “If we can’t make them see the light, make them feel the heat,” he said, adding that Florida would change its stance if Airbnb reversed its policy. In response to DeSantis’ announcement, company spokesman Ben Breit underscored all the other business Airbnb does in Israel, including hosting thousands of Floridians who visit.

“We remain deeply committed to our more than 20,000 hosts in Israel,” Breit said in an email, adding that the company does not support an ongoing international campaign to boycott Israel.

Israel's Strategic Affairs Minister Gilad Erdan praised Gov. DeSantis, saying "This is an important decision that will embolden the fight against anti-Semitic boycott organizations. We will continue to act in all possible ways to nullify the bigoted decision discriminating against citizens of the State of Israel and harming them financially because of where they live."

The Florida chapter of the Council on American-Islamic Relations said it supports Airbnb’s current policy and criticized Florida’s new governor, as well as the state’s policy to divest from any companies that boycott Israel. “Governor DeSantis should abstain from pushing his free-speech crackdown and instead should focus on protecting all Americans and American corporations from being punished by state legislation seeking to implement unconstitutional state-sponsored boycotts,” said Wilfredo Ruiz, a spokesman for the group.