Refugees wait in line for food at the Yarmouk camp
Photo: AP 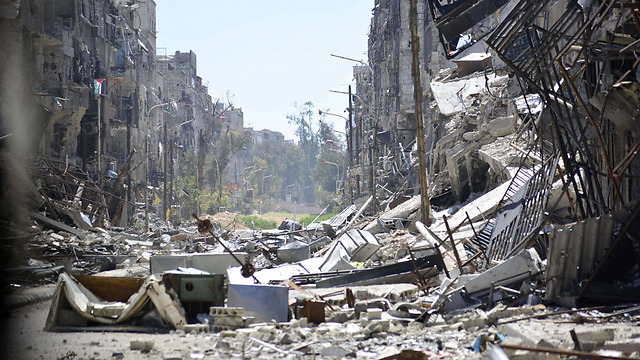 Palestinian Authority has raised $2 million for the reconstruction and resettlement of the refugee camp south of Damascus, which was once considered the capital of the Palestinian Diaspora.

The Palestinian Authority has raised $2 million for the reconstruction and resettlement of the Yarmouk refugee camp located south of Damascus, previously home to approximately 150,000 people and once considered the capital of the Palestinian Diaspora.

The camp—which today contains only 100-200 Palestinians—was destroyed during Syria's civil war. At one point it came under the control of the Islamic State terror group and otherwise was plagued for years by a siege imposed by Syrian President Bashar Assad's regime, which has since recaptured the territory.

The camp was established in 1957 for Palestinians that fled their homes during the 1948 War of Independence and after Arab states refused to grant the Palestinians citizenship.

"The Palestinian leadership is responsible for all refugees around the world; therefore, it will provide them with what's needed," he said.

A Palestinian delegation headed by Azam al-Ahmad visited the Syrian camp on Monday in order to assess its condition and meet with members of the committee responsible for the reconstruction of the camp.

The committe, led by Anwar Abd al-Hadi and formed in coordination with Damascus, is tasked with devising a comprehensive plan to rebuild the camp in cost-effective phases. A first financial installment has already been infused for this purpose while a second is being prepared for transfer.

Islamic State in the Yarmouk camp

Abbas, who is expected to visit Syria soon, has showed a special interest in the camp and called on Assad to facilitate the return of the refugees while providing them with new opportunities. A statement issued on his behalf described the restoration of Yarmouk as a "national duty since Palestinian refugees in all places are an integral part of the Palestinian people."

"The PA's general orientation is to collaborate with the Syrian government to bring back the Palestinian refugees who were displaced to Jordan, Europe and other areas," said Mohammed Elyan, head of the High Committee for Palestinian Refugees.

Elyan conceded that the money raised so far is insufficient to cover the total cost of renovating Yarmouk and that a symbolic gesture perhaps must be considered.

"The committee holds communications with international parties to raise funds for the reconstruction," Elyan said.

Furthermore, the High Committee for Palestinian Refugees head stressed that while Palestinians are being encouraged to return to Yarmouk to bolster their identity as refugees, this in no way infringes on their so-called right of return to their former homes in what is now Israel.

A critic of the United Nations Relief and Works Agency for Palestine Refugees in the Near East (UNRWA), US President Donald Trump, halted all funding to the agency in 2018.

Following Washington's lead, Israel recently launched a similar campaign to end UNRWA’s operations in East Jerusalem, which the Palestinians claim as the capital of their future state.

In 2012, clashes between Syrian forces and Sunni rebels forced most Palestinians out of Yarmouk. In 2015, ISIS fighters seized the camp only to be pushed out last May when Assad retook it.

Article written by Dima Abumaria, reprinted with permission from The Media Line