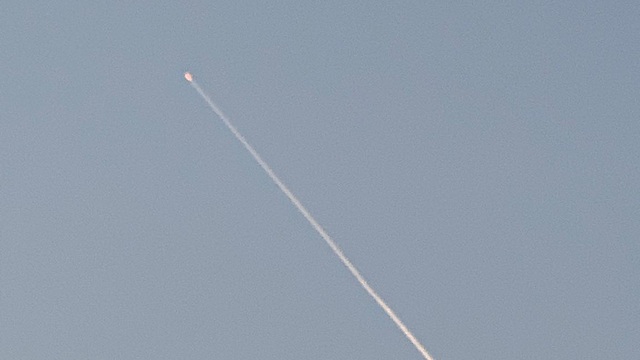 Israel's Defense Ministry and the US Missile Defense Agency successfully carried out a test of the Arrow 3 missile defense system in central Israel early Tuesday morning.

The launch from the Palmachim Air Base, which tested upgrades done to the Arrow 3 system, was done at around 6:44am, with many residents in the area reporting hearing an explosion and seeing the trail of a missile launch in the sky.
Arrow 3 test
X

The Defense Ministry said that "the Israel Missile Defense Organization in the Administration for the Development of Weapons and Technological Infrastructure (known by its Hebrew acronym Maf'at), along with the American Missile Defense Agency (MDA), carried out at 6:44am today a successful test of the Arrow 3 weapons system, which is meant to intercept ballistic missiles outside the atmosphere. The test was done from a testing ground in central Israel, led by the Israel Aerospace Industries and with the participation of the Israel Air Force." "After the launch of the target, the Arrow system's radars discovered it and sent the information to the Battle Management Center, which analyzed it and formulated a full plan to intercept it. When the planning stage was complete, an Arrow 3 interceptor was launched at the target and completed its mission successfully," the ministry said.

The Defense Ministry added that "the success of the test is an important milestone in the State of Israel's operational capability to defend itself against future and existing existential threats in the region."

The Arrow 3 is an Israeli developed, long-range, surface-to-surface missile system that is funded by several Israeli security organizations, namely the Israel Aerospace Industries, the Rafael Advanced Defense Systems, the Defense Ministry and the Israeli Air Force. It is considered one of the best anti-missile defense systems in the world, due to its long-range capabilities and high precision level.

The current version of the Arrow 3 is intended to take on long-range ballistic missiles, which are capable of carrying nuclear payloads, such as those currently in development in Iran.

Since being commissioned in early 2017, the Ministry of Defense, together with Israeli Aircraft Industries (IAI) and in partnership with the United States, have been working on modernizing the weapons system with the latest updates in response to any future threats emanating from the Islamic Republic.

The integration of the Arrow 3 system into the IAF completes the four-tier defense coverage of Israel: the Arrow 3 defends against exoatmospheric, long-range threats; Arrow 2 covers missiles flying within the atmosphere; David's Sling deals with medium-level threats, such as heavy rockets and unmanned aerial vehicles (UAV); and finally, the Iron Dome system defends against lower range rockets, with ranges of up to 90 km.

The Iron Dome system is also being subject to a battery of tests meant to improve its ability to deal with heavy barrages of dozens or hundreds of rockets fired simultaneously from various directions and at multiple altitudes.

In addition to these weapons systems, the older Patriot batteries are still proving useful to the Israeli Air Force, especially against the threat of enemy aircraft infiltrating Israeli airspace, such as the UAVs from Syria that have strayed over the Golan Heights.

A naval version of the Iron Dome was recently declared operational. It is meant to protect the gas drilling rigs at sea from enemy missile boats.