European Union gives over €5 million in 2017-2018 to organizations like Al-Haq and Al-Mezan, which openly promote boycott against Israel; 'Instead of hiding behind empty statements, the EU needs to implement its own declared policy and immediately cease funding organizations that promote boycotts,' says Strategic Affairs Minister Erdan.

The European Union has given over €5 million in grants in 2017-2018 to ten Palestinian and European organizations that promote boycotts against Israel, despite assurances by EU foreign policy chief Federica Mogherini such groups do not receive EU funding, according to a new report by the Strategic Affairs Ministry released Wednesday.

Al-Haq, which is based in Ramallah, works with a series of European organizations to promote boycotts against Israel. It also acts against Israel at the International Criminal Court (ICC) at The Hague and at the United Nations' Human Rights Council.

(Photo: Reuters)
Last year, Al-Haq published a document calling on foreign companies and banks to withdraw funding and cancel any activities in the Israeli settlements in the West Bank. In June 2018, the NGO called for sanctions to be imposed on Israel. The Strategic Affairs Ministry also says the organization has ties to terror elements. The Al Mezan Center for Human Rights, which is based in Gaza, also acts on the international legal arena alongside promoting boycotts against Israel. Six months ago, the Strategic Affairs Ministry released an in-depth study that detailed and analyzed EU funding for anti-Israel boycott organizations in 2016. At the time, Strategic Affairs Minister Gilad Erdan urged Mogherini to immediately halt the funding for these organizations. But Mogherini rejected "any suggestion of EU involvement in supporting terror or terrorism," adding that "allegations of the EU supporting incitement or terror are unfounded and unacceptable," and warning that "vague and unsubstantiated accusations serve only to contribute to disinformation campaigns." 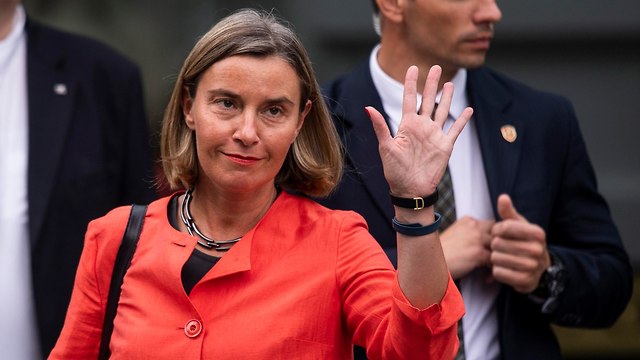 EU foreign policy chief Federica Mogherini (Photo: EPA)
She stressed that there were strict monitoring and verification procedures in place, adding that "We are confident that EU funding has not been used to support boycott of Israel or BDS activities and certainly not to finance terrorism." The Strategic Affairs Ministry then looked into EU funding in 2017-2018, finding that the EU continued transferring money to boycott organizations. "These findings align with the findings of a recent report by the European Court of Auditors (ECA), the European Union's financial-audit body, which identified significant shortcomings in the EU’s ability to monitor funds transferred to the numerous organizations receiving EU aid. The ECA warned that the European Union lacks sufficient information and transparency as to how these funds were distributed or spent," the ministry said. In light of the finding of the latest report, Erdan urged Mogherini to end the duality of EU policy, which officially opposes boycotts against Israel on the one hand, and supports boycott organizations on the other.

"The time has come for the EU to begin a deep reexamination of its policies," Erdan said. "Instead of hiding behind empty statements, the European Union needs to implement its own declared policy and immediately cease funding organizations that promote boycotts against the State of Israel."

The EU's mission in Israel said in response: "The Court of Auditors' (ECA) report found the EU's selection of NGO-led projects in external action to be generally transparent and in accordance with international transparency standards. We stress that the Audit reviewed EU cooperation across the world, and did not make any specific findings regarding funding of Israeli or Palestinian NGOs.

"The European Commission is one of the most transparent organizations in the world—no matter if the question is about our own practices or the way we work with others. The EU has very strict rules to screen and vet the beneficiaries of EU funds. We take any allegation of misuse of EU funds very seriously and are committed to investigate all those presented with substantive evidence.

"We previously analyzed the Ministry's so-called 'Money Trail' report and came to the conclusion that allegations presented in the report are unfounded and factually incorrect. Following the publication of the so-called 'Money Trail' report in 2018 we invited the Israeli authorities to engage in a productive dialogue on civil society as foreseen by the EU-Israel Action Plan. This offer was not responded to, but still stands. We consider it unfortunate that again unsubstantiated material is being publicized without prior dialogue and engagement.

"On the separate issue of boycott, the European Union has not changed its position regarding the so-called 'Boycott, Divestment, Sanctions' ('BDS') movement. While it upholds its policy of clearly distinguishing between the territory of the State of Israel and the territories occupied by it since 1967, the EU rejects any attempts to isolate Israel and does not support calls for a boycott. The EU does not fund actions that are related to boycott activities. At the same time, the EU stands firm in protecting freedom of expression and freedom of association in line with the Charter of Fundamental Rights of the European Union."