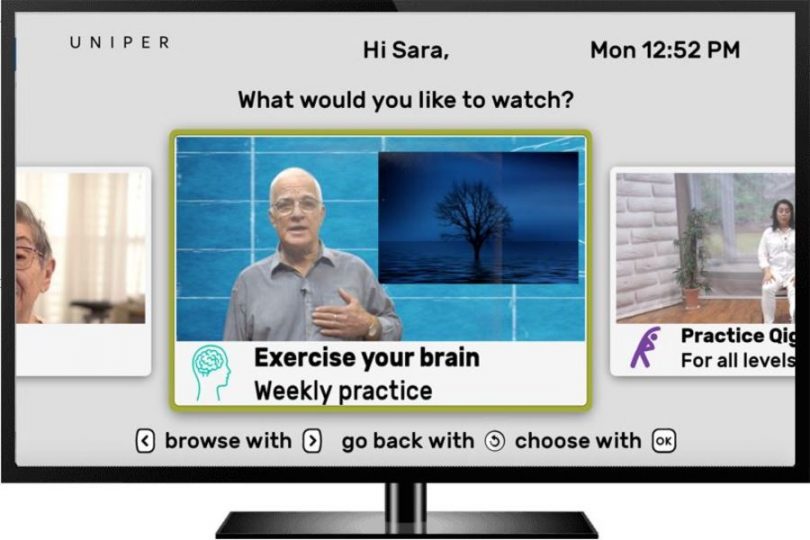 Start-up uses its elderly users' familiarity with television sets to allow them to connect with family, doctors and educators, to play games, watch shows or just chat.

An Israeli start-up has created a closed social network for Holocaust survivors in Los Angeles that allows them to interact with friends and conduct activities from home.

Uniper Care’s advanced technology relies on its users' familiarity with television sets to allow the elderly to connect with family, doctors and educators. By plugging the Uniper box into a TV, Holocaust survivors can connect directly with their peers to play games, video chat or even exercise with fitness instructors.

“I really love this program because it allows me to work out from home and gives me a chance to see many shows I would not have access to on regular television,” said an 88-year-old survivor, speaking on condition of anonymity. “One of my favorite things about this program is seeing my kids and grandkids over the TV.”

Born in the city of Munkacs in former Czechoslovakia, MM, as she asked to be called, currently resides in Sherman Oaks, California. She has three children and several grandchildren. “Munkacs was a very nice Jewish city. We lived in peace even with the non-Jews but then times changed," she said. "First the Russians came, then the Hungarians. They worked with Germany. I was 14 years old when I went to concentration camps.”

MM was interned at Auschwitz and later sent to work at an ammunition factory with her two sisters. After the war, she and her siblings attempted to immigrate to pre-state Israel but were unable to do so, finally ending up in the United States. “(The social network) keeps me busy and gives me good quality programs,” MM added.

“I enjoy watching ballet and listening to music (as well as) history lectures. It feels good to have specialized Jewish/senior programming,” she said.

The pilot for the social network launched in Israel in late 2017 and has gone through several rounds of testing. This led Uniper Care to join forces with US-based startup accelerator Fusion LA to market the product in California. Over 3,000 units have thus far been sold and around 800 are currently in use in the United States.

“The idea started with Holocaust survivors, (many of whom) can’t get out very much and are therefore isolated and lonely,” Avi Price, Co-Founder & COO of Uniper Care Technologies, said. “The whole agenda was: How can we make their lives better and more social? Our average user is 80, they’re not on Facebook and most of them don’t have computers.”

Price, whose grandfather left Austria in 1938 just prior to the outbreak of World War Two, explained that the product works by placing a small webcam atop a television that is controlled with a simple microphone-equipped remote control.

“Part of our agenda is we don’t want to go after the more affluent populations so we’re actually going after the people who need it most and who are often stressed for money,” Price said. “People with low social determinants—mainly affected by social status, education and money—are unaware of options and usually suffer from poor health conditions

According to Price, scientists from Haifa University and MIT Labs found that active use of the social network led to a reduction in loneliness and depression. The full findings of the research, which examines the connection between technology use and social isolation among the elderly, will be published shortly.

Uniper Care Technologies does not sell directly to consumers, but rather to organizations that then distribute—and even pay for—the software under various labels. One such client is the Jewish Family Services (JFS) association of Los Angeles, which has dubbed the network “JFS LIFE@Home.”

“Over a 3-year period, JFS tracked the attendance of Holocaust survivors on our social program, Café Europa, and noticed some trends that concerned us,” said Sheila Moore, Senior Director of Comprehensive Older Adult Services at JFS Los Angeles. “We saw that our community of survivors was becoming frailer and, as a result, many were either unable to participate in community events or were dependent on others to ensure their connections.

“Many say JFSLIFE@Home has changed their lives,” she said. “Many have gone from limited interactions with family and care attendants, left alone for hours during the day, feeling lonely and depressed, to becoming regular attendees of online classes, engaged and connected.”

Uniper Care's project has shown enough promise to be extended for another two years with the ultimate aim of “becoming a global network.”