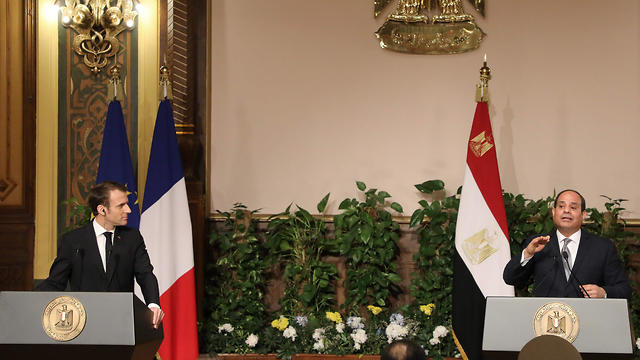 As he meets Egyptian counterpart in Cairo, French president says current crackdown seems worse than those led by Mubarak, too many ordinary people 'who do not threaten the regime's stability' have been jailed.

CAIRO  -- French President Emmanuel Macron said he encouraged respect for human rights when he met Monday with Egyptian President Abdel-Fattah el-Sissi, who is seen as a key ally in the fight against Islamic extremists but has led an unprecedented crackdown on dissent.

Macron, heading a large delegation on a three-day trip to the Arab world's most populous country, said ahead of the talks that he wanted to "pursue a truthful dialogue on topics of public freedoms and human rights" -- something he has raised with officials in past meetings.

France, which considers itself the birthplace of human rights, has come under pressure from rights groups and activists to raise the matter with el-Sissi, who led the military overthrow of an elected but divisive Islamist president in 2013.

Since then, authorities have jailed thousands of people, mainly Islamists but also a number of prominent secular activists, including many of those behind the 2011 uprising that toppled longtime autocrat Hosni Mubarak. Egypt has also been accused of arbitrary detention, disappearances and torture, and has silenced most independent media. Authorities say they are fighting terrorism and trying to restore stability after years of unrest. Macron said that too many ordinary people "who do not threaten the regime's stability" have been jailed. "It is on this area of what is happening in Egypt that I will continue to focus things. I will do it more openly during this trip," Macron told reporters late Sunday, adding that better treatment for political opponents was in the interest of el-Sissi and Egypt. Macron said he felt the current crackdown had become worse than those led by Mubarak. "What is happening here sooner or later threatens the stability of Egypt," Macron said. "The policies as they are being done are perceived by intellectuals, the Egyptian civil society, as being even stronger than (under) the Mubarak regime." Macron also said that he would raise specific names with el-Sissi in a closed-door discussion.

Emmanuel and Brigitte Macron visit the Abou Simbel Temple during a state visit to Egypt, January 27, 2019.
Rights groups and activists have urged France and other Western powers to halt weapons sales to Egypt, a major purchaser, until it shows improvement in the way it treats its own citizenry. But Macron dismissed using such pressure, saying it was important to respect Egypt's sovereignty. He warned that in the absence of Western support, Egypt could turn to China and Russia. El-Sissi is already courting both. Asked specifically if human rights issues could affect specific arms sales, such as one under discussion for additional Rafale advanced fighter jets to Egypt, Macron said such matters were separate. "I would differentiate between the two subjects, they are not linked for us and they never were." Macron arrived Sunday in Egypt and visited the country's south, where he toured the famed temple of Abu Simbel and other archaeological sites. He is to meet el-Sissi later on Monday, when he will sign several bilateral accords. His delegation includes government ministers, two dozen representatives from academic, cultural, and scientific fields, and a dozen business leaders -- including the heads of Rafale producer Dassault. Macron will also dine with local business leaders and meet the heads of Egypt's Christian and Muslim communities during the trip, his first to Egypt since taking office in 2017.