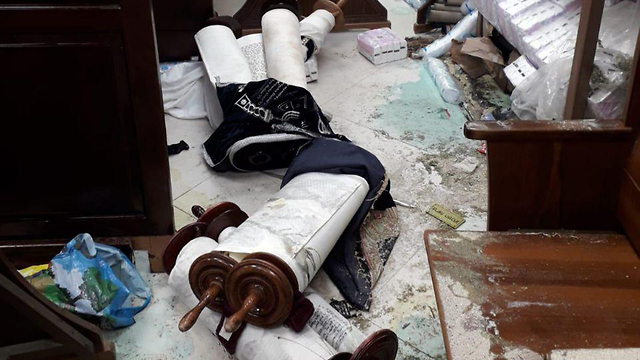 Burglars broke into a synagogue in the Kiryat Yovel neighborhood of Jerusalem overnight Monday, tearing open the ark that houses the holy Torah scrolls and throwing the contents to the floor. Police are investigating.

"We arrived this morning for prayers and saw the synagogue had been turned completely upside down," said Yisrael Levy, the synagogue's gabbai (warden).

"We do not know who broke in, there are no cameras around the synagogue," he said.

Jerusalem Mayor Moshe Lion condemned the vandalism of the synagogue, saying it harked back to times when Jewish religious artifacts were routinely desecrated.

"This is a serious incident that brings to mind dark periods for the Jewish people," Lion said. "We cannot let such crimes happen today. I am certain that the Israel Police will quickly get their hands on the criminals."

"The heart recoils in horror at the disgraceful sight of Torah scrolls unfurling at the hands of villains inside the synagogue," said Israeli Chief Rabbi Yitzhak Yosef.

"Every Jew who holds honoring the Torah dear to his heart will spend a day in silent Torah study to (restore) the honor of the Torah that has been desecrated," the rabbbi said.

President Reuven Rivlin also condemned the break-in, and expressed his confidence that the perpetrators would soon be caught.

"Difficult and painful images this morning from the Kiryat Yovel synagogue," the president wrote on Twitter. "I am certain that the Israel Police will soon catch the (criminals) and bring them to justice."

The burglary was condemned by a series of ultra-Orthodox lawmakers, including Interior Minister Aryeh Deri of Shas, who rushed to the site on Tuesday morning.