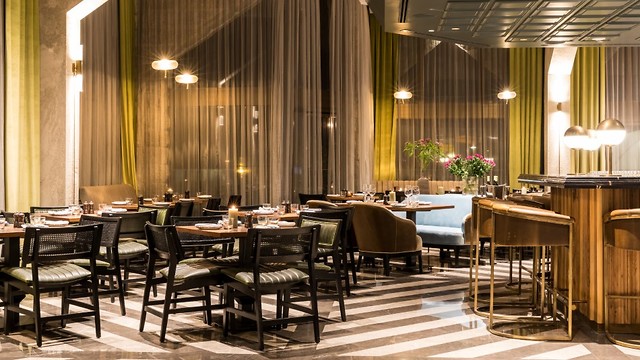 Review: Jerusalem’s Inbal Hotel opens a new restaurant unlike any other you are likely to find in a five-star property—02—promising 'upbeat Israeli cuisine.'

The Inbal Hotel at Liberty Bell Park in Jerusalem recently transformed the cozy bar in the rear of its lobby into a small restaurant serving food inspired by Jerusalem’s steak restaurants. The restaurant’s name—02, the capital’s area code—is on a banner outside the entrance that also announces a type of food that sounds good, yet still reveals nothing: “upbeat Israeli cuisine.”

The restaurant has maintained the plush seating and dim lighting of the bar, giving the place an intimate feel. Only the lively salsa background music seems a bit out of place.

The cocktail menu lists only classics, although the waitress told us there were three special cocktails that evening. She had no names, but the description of the rum-based cocktail with ginger and maple intrigued us. Garnished with fresh pear and a burnt lemon slice, it was pleasantly smooth with a slight kick.

02 restaurant at the Inbal Hotel in Jerusalem (Photo: Yonatan Ben Haim)
The food menu comprises four sections: Starters, Skewers, Butcher’s Cuts (steaks) and Sides. There are a few vegan options overall, but only one among all the main courses. Just to confuse matters a bit, there is also something called “Starters and Bread” that is listed separately from the dishes in the Starters category. It actually consists of quite a spread: three kinds of bread—pita, sesame bagel and ciabatta—along with three dips, three small salads, and a small plate of olives and pickled vegetables. The dips were a slightly spicy walnut and peppers spread, fruit chutney, and a mild matbouha, while the three mezze were a refreshing orange salad, warm chickpeas with herbs, and a sweet potato with walnuts tzimmes. They were all so good it is easy to fill up on them, especially since 02 is generous with refills. If you do order the bread and accompaniments, you might want to consider forgoing a regular-sized starter. Of the eight standard starters, we selected the sirloin roast, in spite of the confusing condiment “eggplant caramel.” The roast was razor-thin slices of steak at room temperature that nevertheless delivered a full measure of flavor.

Sirloin roast (Photo: Buzzy Gordon)
Our waitress recommended as our second starter the slow-cooked lamb shreds with amba oil and braised chickpeas. We were happy we listened to her, as the tender meat was sinfully rich. Our only regret is that it was gone all too soon.

Deciding among the steaks was not easy, and not only because of the mouthwatering choices. We wanted to order the prime rib, but it was only available starting at weights of a kilo or more, which was too much even for two to share, if we also wanted to sample a skewer or two. So we settled for the ribeye, whose smallest size was also large enough for two to share.

Not that eating the ribeye was much of a sacrifice. It was grilled to a perfect medium-rare, sliced off the bone, and positively succulent.

Ribeye (Photo: Buzzy Gordon)
There are eight skewers on the menu, representing surprising variety: poultry, fish, lamb, sweetbreads, vegetarian and beef. We chose the pullet skewer by virtue of its marinade of harissa and date honey, a sweet-and-savory combination that made all the difference.

Our second skewer was a traditional kabab, juicy ground beef with just the right amount of zesty seasoning. It was served with what the menu calls “bread salad”—a generous leafy green salad with large croutons that were soft instead of crunchy.

Pullet skewer (Photo: Buzzy Gordon)
What threatened to steal the show, however, was the maklouba side dish. This expertly seasoned classic Arab rice and lamb casserole was superb; fortunately, it was already the size of a starter, and worthy of being elevated to the status of a main course. There is a limited wine list of exclusively Israeli vintages, with an adequate selection available by the glass: two whites, three reds and one sparkling.

There are four desserts listed on a separate menu, from which we chose the chocolate cremeux with almond ice cream, and the rice pudding with apple compote.

The chocolate mousse and ice cream were both better than might be expected from pareve, while the rice pudding and apple compote combination was a very pleasant surprise: this was not your grandmother’s kosher-for-Passover compote—rather an exotic, fruity version accented with cardamom and hibiscus.

Rice pudding with apple compote (Photo: Buzzy Gordon)
It is clear that there is real talent in the 02 kitchen; it would be nice to see it turned loose on the main courses as well the outstanding mezze, starters and sides. 02 @ Inbal Hotel