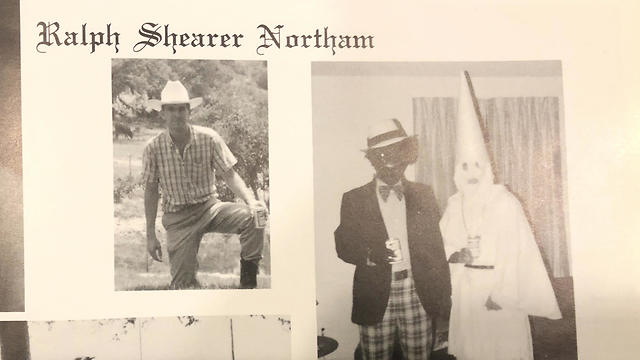 Virginia's Governor Ralph Northam appears to be wearing a Ku Klux Klan costume in his 1984 medical school yearbook; when the photo surfaced he apologized, but later denied it was him in the picture.

Virginia Governor Ralph Northam on Saturday resisted mounting pressure from his Democratic party that he resign, denying that he appeared in a racist yearbook photo while admitting he once wore blackface in a dance contest. Northam, who took office a year ago, said he would stay in his job. "As long as I feel that I can lead, I will continue to do that," he said.

But even after he professed his innocence at a press conference, the pressure continued to grow, with senior Democrats across Virginia calling on him to step down.

Northam had apologized on Friday, saying he was one of the people shown in the photo from his 1984 medical school yearbook, which depicted one person in blackface standing next to another in a Ku Klux Klan costume. But on Saturday he said he looked at the photo more carefully and is sure it was not him. In a news conference alongside his wife, Northam said he had made other mistakes, including dressing up in blackface to imitate Michael Jackson in a dance contest around the same time. Northam apologized for his past actions and vowed to work to earn forgiveness.

Virginia's Governor Ralph Northam dressed in a KKK costume (Photo: AP)
"I am simply asking for the opportunity to demonstrate beyond a shadow of a doubt that the person I was is not the man I am today," Northam said. His comments did not quell the growing pressure from within his party for him to resign.

"After we watched his press conference today, we called Governor Northam to tell him that we no longer believe he can effectively serve as Governor of Virginia and that he must resign," they said in a joint statement.

Even as Northam was speaking, Tom Perez, chairman of the Democratic National Committee, said it was time for him to go. "Virginians and people across the country deserve better from their leaders, and it is clear that Ralph Northam has lost their trust and his ability to govern," Perez said in a statement. Democratic US Representatives Gerry Connolly and Don Beyer of Virginia said in a joint statement that they did not hear anything at his press conference that changed their view that Northam should resign.

Virginia's Governor Ralph Northam (Photo: Reuters)
Earlier in the day, others also called on him to step down. "Governor Northam has lost all moral authority and should resign immediately," former Vice President Joe Biden, a Democrat weighing a 2020 presidential run, said on Twitter. Protesters gathered in front of Northam's office in Richmond, Virginia, waving signs demanding he step down. The head of Northam's party in the state also called on him to quit. Other prominent Democrats - including 2020 presidential candidates Kamala Harris, Cory Booker, Kirsten Gillibrand, and Julian Castro - have been calling on Northam to resign since Friday. Northam, a 59-year-old pediatric neurologist and Army veteran, graduated from Norfolk medical school in 1984.

The Virginia-Pilot, which published the photo on Friday, said on its website it obtained a copy of the photo from the Eastern Virginia Medical School library.

In tweets Saturday night, President Donald Trump criticized Northam over his recent comments on late-term abortion. He also said that Northam's Republican opponent in the 2017 gubernatorial election, Ed Gillespie, would have won had the photo turned up during their campaign.