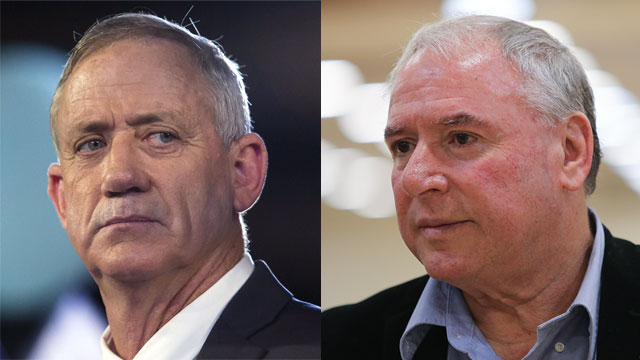 After accusing former IDF chief of 'throwing himself a retirement party that cost NIS 600,000 in tax payer money,' Amsalem calls Gantz 'autistic person' for not being aware of how much the party cost; Lapid, whose daughter is autistic, slams the Likud MK.

In an interview with Radio Darom, Amsalem accused Gantz of "throwing himself a retirement party (from the IDF) which cost NIS 600,000 in tax payer money."

When interviewer Mendi Rizel reasoned that Gantz did not organize his own party and therefore was unaware of how much it cost, Amsalem responded: "It's as if the IDF chief is some autistic person who doesn't care about anything and doesn't understand anything."

Gantz, who has emerged as a viable rival for Prime Minister Benjamin Netanyahu in the April 9 elections, has been the target of frequent attacks from Netanyahu's Likud party, including claims that the former IDF chief is left-wing or a danger to democracy.

Benny Gantz and David Amsalem (Photos: GettyImages, Alex Kolomoisky)
Yesh Atid leader MK Yair Lapid, whose daughter is autistic, slammed Amsalem. "Dudi Amsalem just said on the radio that Benny Gantz is autistic. Because being my daughter is a curse to him. Because in Amsalem's world, they always step on the weak," he wrote. "Benny Gantz is not autistic, Mr. Amsalem," Lapid said. "There's no need to pull over on the side of the road when he flies into a rage and starts biting his mother. He doesn't steal food from others' tables at restaurants. He doesn't need to undergo dental treatments under full anesthesia. His parents are not up at night trying to figure out who would take care of him when they are old." "I'm a politician; I'm supposed to always talk nice. Not this time. Beware of me Dudi, talk nicely about my daughter," Lapid said.

Lapid and Gantz are currently holding low key talks about a possible team up between their two parties ahead of the April 9 elections. The main point of contention is who will lead the joint bloc, should they choose to unite.

In response to Lapid, Amsalem issued a statement saying "I had no intention of hurting his (Lapid's) daughter, and certainly not any other special needs population. It saddens me that you are trying to gather votes using such a painful and sensitive issue. In any case, if anyone was offended by what I said, I deeply apologize for it."