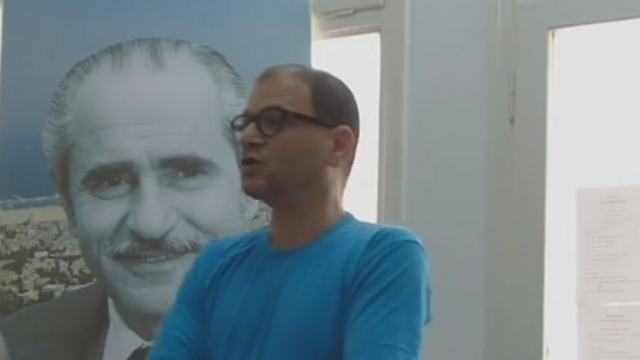 Opinion: Although we did not agree on much, Dov Khenin of Hadash was a positive link between the Zionist and non-Zionist Left; but if the High Court does not invalidate his replacement, who has a history of anti-Semitic statements, then the Knesset may as well just shut up shop.

Hadash MK Dov Khenin has not yet left the Knesset and I am already beginning to miss him — because among the prominent Israeli non-Zionist Left, Dov is from another era. In general we did not agree on much, but he did not slander and defame the State of Israel.

Ksif’s comments are nauseating. He had this to say regarding Justice Minister Ayelet Shaked: "This neo-Nazi scoundrel is not only responsible for and co-opted for the fascification of Israel, but she is also an indirect partner to genocide in Africa and crimes against humanity." Not only will we be nostalgic for Khenin, with such a style of speech, Likud MK Oren Hazan, notorious for his ill manners, seems like a man of manners and elegance.

The Nazis blamed the Jews for all the troubles of the world, and today there are the new anti-Semites of Ksif's ilk who are also accusing Israel of genocide in Africa. Even the Anti-Defamation League, which generally does not hurry to intervene regarding statements made by Israeli academics, demanded that the Hebrew University of Jerusalem take steps against Ksif.

Dov Khenin (Photo: Ohad Zwigenberg)
Ksif was not satisfied only with Shaked, of course, and has already compared Israel to Nazi Germany. Nothing happened as a result — because he was quickly defended by the people who turned "academic freedom of expression" into a tool that gives them a license to utter any abomination; and that's the problem. As far as Ksif is concerned, “Zionism is the family name of racism and nationalism, exclusion and oppression, occupation and war-mongering, class exploitation and the service of imperialism.” Even if we try we would not find such expressions made by Dov Khenin, or even most of the Communist Party members. Ksif is not upholding the legacy of the party; on the contrary, he has adopted the radical, imperialist, Islamist point of view. That is not my opinion, those are the words of a senior Hadash Party member, Tawfiq Toubi. Toubi not only supported the partition plan, he also congratulated Israel for its victory in 1948: “The establishment of the State of Israel and its resistance to imperialist plots and intervention were made possible by the resistance of the Israeli masses and their struggle for independence and freedom... “In their opposition to the war of aggression against Israel, the Arab democratic forces were subject to oppression and terrorism by the Arab reactionaries. And if imperialism temporarily succeeded in denying the Arabs in the Land of Israel their freedom and independence, and even if it managed to bring upon the Arab people a disaster that rarely seen in history, it did not succeed in destroying the State of Israel, and this is a victory for all the forces of freedom and democracy in the Middle East." Under the title “preventing participation in elections,” section 7A of Basic Law: the Knesset states: "No person shall be a candidate in the Knesset elections if the actions of the person, including his statements, as the case may be, explicitly or implicitly, deny the existence of the State of Israel as a Jewish and democratic state." The High Court of Justice repeatedly trampled on this explicit law, and allowed the likes of Azmi Bishara and a party like Balad to run in the Knesset elections. They did this through interpretive acrobatics. The High Court's ruling gave legitimacy to extremism, and the result is a disgrace of Ksif’s kind. With the election of Ksif to a realistic spot on the Knesset list, there is an opportunity to make proper and correct use of the law. If, on account of his past statements, his candidacy is not invalidated, then the legislators ought to shut the lights, close up shop and return the keys to the Supreme Court.