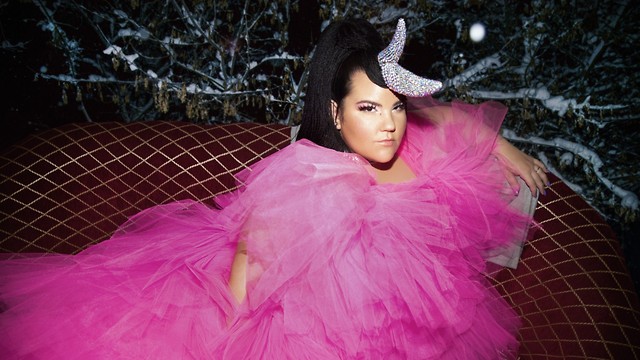 The current queen of Eurovision makes a statement with her bold fashion choices in the video for her latest single Bassa Sababa, using traditionally feminine colors to convey messages of empowerment and wearing attire designed exclusively by local fashion brands.

The reigning Eurovision winner Netta Barzilai opens her new music video Bassa Sababa looking into the camera dressed as a human rhinoceros, wearing a pink tulle dress designed by Karin Vasilyuk and an bedazzled horn created by hair designer Avi Malka, who has been accompanying the singer over the past year.

Barzilai’s appearance in her first video since winning the the Eurovision Song Contest last May is a visual statement. It was directed by Roei Raz Hakisharoni and has art design created by Shmuel Ben Shalom, who will also design sets for the 2019 Eurovision in Tel Aviv. The extravagant attire Barzilai is wearing in the video is the work of stylist Itay Betzaleli. The final look is an attempt by Barzilai to market herself as an original and consistent visual language innovator, which is evident by the fact that the video generated over a million views in the first day since being released on YouTube.

Barzilai's ensembles in the video is an attempt to convey strength, confidence and a non-apologetic presence. By opting for theatrical and larger than life clothes, Netta reinforces one of the hottest fashion trends —evening wear and giant bows—that seek to regain control of not only the discourse but the physical space as well.

This is a stylistic choice that corresponds with Barzilai's messages of female empowerment in the MeToo era. In the video, Netta, as a swift rhinoceros, pursues a man who is fleeing from commitment. Barzilai pierces through him as if he is a bubble gum bubble, which can later be scraped off the sole of her shoe.

Barzilai's style might not be everyone's cup of tea, but her carnival-like appearance is an antithesis of the demand placed on Israeli artists to shrink, appear nonchalant and not draw too much attention to themselves. Netta takes her fashion style to the extreme, making other purportedly extravagant Israeli artists like Static and Ben El appear as clad in the off-cuts of her fabrics.

In the face of constant pressure faced by women in general (and plus-sized women in particular) to be thinner, Barzilai owns her size and even goes as far as to handpick clothes that further emphasize her curves.

Pink undertones are seen throughout the video (Photo: Daniel Kaminsky)

The pink undertones of Netta’s wardrobe in the video are clearly an integral part of the video’s artistic concept, which can be seen as a reappropriation of a color that is ostensibly feminine, childlike and sweet, and using to convey a message of power. Barzilai is trying to empower thousands of young girls to wear pink and feel strong.

Barzilai's choice of fashion designers for the video is a vote of confidence in the Israeli fashion industry, for surely the winner of Eurovision could have her pick of  outfits from a number of international brands and fashion houses. But Netta and stylist Betzaleli decided to stick to Israeli designers, one of whom is Daniel Silverstein, who is based in New York and has already designed garments for such artists such as Lady Gaga. Her other designers include Galia Lahav, Yam Yagudayev and Rotem Shaul, a fourth-year student at the Shenkar fashion school.

When it comes to accessories, Barzilai also went "blue and white." The three-dimensional sunglasses are part of Nona Chalant’s Seahorse capsule collection, which has been designed in collaboration with jewelry designer Yaron Shmerkin.  If only all Israeli artists could show such solidarity.