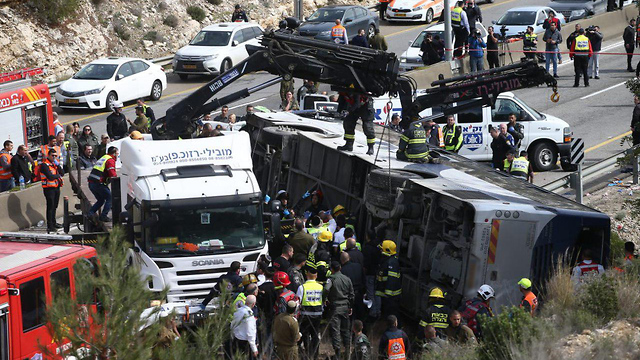 Two people were killed and 51 more were hurt Sunday morning, when a public bus overturned near the central city of Modi'in.

Two people were seriously hurt in the incident, including a man in his 20s; another five were moderately hurt and the rest sustained minor injuries.

The incident occured on Route 443, close to the settlement of Beit Horon. The bus, belonging to the Kavim company, was heading from Modi'in to Jerusalem.

The Magen David Adom rescue service said large numbers of its emergency personnel rushed to the scene to treat the injured. Fire and police rescue workers used specialist equipment to free a number of people trapped in the wreckage, including a crane that tipped the bus off its side and back into an upright position.

The initial assessment was that the bus had collided with a car in front, but Avi, an eyewitness at the scene, gave a different version of events.

Getting the bus upright

"I was on the road and was one of the first to arrive at the scene," he said. "There was (an initial) accident on the opposite lane in the direction of Modi'in Illit. A rescue vehicle ... in the opposite lane had apparently stopped to help with the accident. He stopped suddenly with the bus behind him travelling at about 80kmh. The bus driver instinctively swerved to the right and collided with the safety barrier, and that is what caused it to tip over. Some of the passengers climbed out of the bus themselves, and then the resuce services and army arrived."

Evacuating the injured to Shaare Zedek Hospital in Jerusalem

Following the accident, Route 443 was closed in both directions and police were directing traffic away from the scene. Israel Police urged motorists to stay away from the area of the crash and seek alternative routes.

According to data from the Israel National Road Safety Authority, 33 people were killed in 2018 as a result of traffic accidents involving buses. On Saturday, 19-year-old motorcyclist was killed in a collision between two motorbikes and a car in Nazareth.