Swastikas graffitied in the Bondi neighborhood 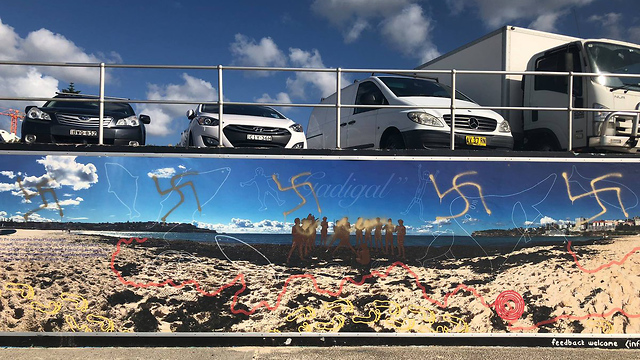 Anti-Semitism in Australia: Dozens of swastikas painted at Sydney beachfront

More than 30 swastikas were found daubed around the Bondi neighborhood of Sydney, Australia on Sunday, in what the local Jewish community has said is a growing trend of racism throughout the country.

The Australian newspaper reported that the graffiti was sprayed repeatedly along the Bondi Beach promenade and at a shopping center.

Australian Jewish Association president Dr David Adler called the incident a "disturbing" attack that targeted the area's sizeable Jewish community, according to the local media. The attack, Adler said, was part of a “extremely worrying” trend of anti-Semitism in the country.

Swastikas graffitied in the Bondi neighborhood

“Leaflets were dropped last year in letter boxes in the Bondi area and posters have been put up at university campuses in Sydney that have very ugly antisemitic messages.”

The murals at the beach walk along Australia's most iconic beach now bear numerous swastikas!!

Adler pointed out that the Bondi area is home to Holocaust survivors who were particularly upset by the incident, and said that the Bondi police investigating the attack.

"Anti-semitism, racism, and hatred in all its forms has no place in our community," wrote former Australian ambassador to Israel Dave Sharma on Twitter.

What an abominable, intolerant and shameful act. Anti-semitism, racism, and hatred in all its forms has no place in our community. https://t.co/pY8AXn7KPc

“The people of Bondi and indeed all Australians of goodwill will stand together in condemning this shocking display,” Vic Alha­deff, the CEO of the New South Wales Jewish Board of Deputies told The Australian newspaper.

The paper quoted the Executive Council of Australian Jewry as saying that anti-Semitic incidents in Australia had grown by an "unprecedented" 60% in 2018, as compared to the year before.

Police have urged anyone with any knowledge of the incident to come forward.