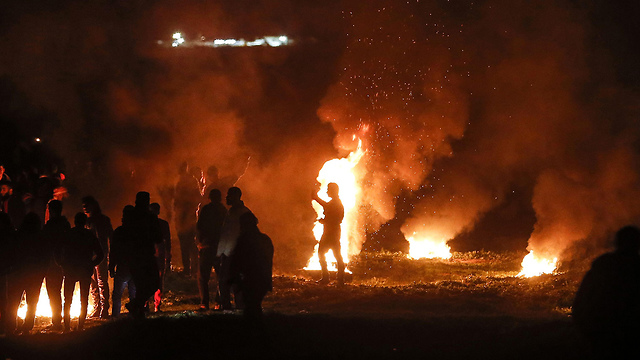 Gaza militant groups warn of escalation ahead of weekly protests

Clashes are gradually heating up on the border between Israel and the Hamas-ruled coastal enclave, leading to the deaths of two Palestinian teens during last week’s riots

A joint statement by all of Gaza’s militant groups on Wednesday warned that clashes at the Gaza border, which take place every Friday, could this week lead to an escalation in violence.

The organizations “will not allow Israel to keep harming protesters during the March of Return peaceful rallies,” they said in a statement, referring to the weekly demonstrations that take place near the Gaza Strip’s border fence, which often turn into violent riots.

“The Zionist enemy is responsible for any kind of harm to the rights of the Palestinian people,” the statement said. “All signs point to a nearing clash, we won’t accept the fact that our people are starving and thirsty.”

Referring to an informal November agreement between the two sides, in which Qatar would transfer millions of dollars to the Gaza Strip in return for for relative calm, the statement said that international “negotiators have to pressure Israel harder, so that the arrangements the were reached are upheld.”

The statement was released several days after Hamas stepped up hostilities toward Israel, with the resuming of nightly clashes on the border fence. Dozens of Palestinians have clashed with IDF forces along the Strip’s fence in the Jabaliya region in recent days, throwing firecrackers at IDF soldiers, who used crowd dispersal methods in an attempt to control the riots.

Shalabi’s funeral made headlines when body was placed in a school classroom during the funeral march, and students were asked to kiss it.

The IDF has also arrested a man who tried to swim past the maritime blockade on Gazax.

The last wave of nightly riots came to a halt when Israel allowed a third installment of Qatari funds in the Gaza Strip on January 26, as part of the informal agreement.

Hamas had initially refused to accept the third tranche but the funds finally went in after Qatar pledged the it would be used to relieve impoverished families in the Gaza Strip, and for different humanitarian projects in accordance with the United Nations and Hamas.

However, the change of terms and Hamas’ initial refusal to accept Israel’s conditions regarding the Qatari money meant clashes between Israel and Hamas would soon resume, as indeed happened in recents weeks.

Hamas is planning to resume nighttime clashes on a regular weekly basis. Furthermore, the organization also resumed confrontations at the Strip’s northern naval border, including with Gazan vessels that sail to the border every Tuesday.

According to assessments by Israeli Military Intelligence, Gaza is second place on the IDF agenda as long as Iranian forces are still involved in Syria and Lebanon. However, the assessment acknowledge the fragile situation in the Strip and said a flare-up with Hamas is expected to take place in recent months or during the summer.