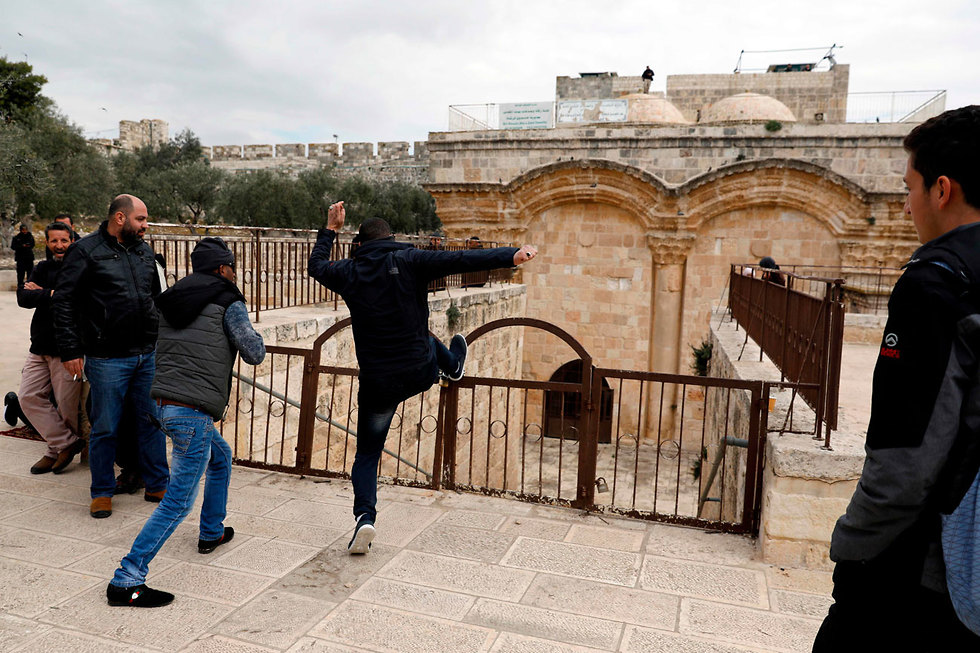 Backed by Abbas, Islamic trust that maintains Muslim buildings at Jerusalem holy site demands Israel reopen area shuttered by courts, warns failure to do so could lead to renewed violence; row aims to sway Israeli government, assuming it does not want bloodshed ahead of April elections.

A year and a half after the crisis over using metal detectors at the Temple Mount compound, new tensions are developing at the Jerusalem site holy to Jews and Muslims, which threaten to erupt into violence.

In recent days, the Waqf —the Islamic trust tasked with maintaining the Muslim structures at the site — has been trying to reopen a small compound in the eastern part of the Mount, on the inner side of the Golden Gate entrance. The compound, called Bab a-Rahema, has been closed in recent years because the banned Islamic Movement used it as meeting place.

On Thursday, the Waqf held prayers in the area, violating the court-ordered closure of the site. In response, the police locked and chained the gates of the compound. On Monday, several Palestinian activists tried to tear down the gate into the compound, and held another prayer service there, led by Waqf chief Raed Dana.

The break-in attempt and the prayers, which had the Waqf's blessing, appear to be a calculated act by the Islamic trust aimed at reopening the compound by exerting public and Arab pressure on Israel, including a threat of possible violence.

These actions are based on the assumption that Israel does not want to see the area around the Al-Aqsa Mosque, which sits atop the Temple Mount, become a flashpoint before the April 9 elections in Israel.

Senior Waqf official Akrama Sabri who is considered to be the organization's most radical figure, said Sunday that Muslims have full rights to the compound and that the Waqf does not recognize the Israeli court's decision to close the compound on the grounds that the area is not bound to Israeli court rulings.

Israeli police arrest protesters at the Temple Mount after the compound is reopened (Photo: AFP)
The Palestinian Authority, Hamas and even Jordan have already joined condemnations against Israel in order to open the compound. Mahmoud al-Habash, a senior advisor to Palestinian President Mahmoud Abbas, warned that the closure of the compound is a declaration of war on Islam and that Israel is playing with fire. "The Palestinian presidency strongly condemns Israel's actions at the Al-Aqsa Mosque and its gates, in particular the chaining of the Golden Gate," Abbas' office said in a statement. "We call on the government of Israel to take full responsibility for the tensions and the deterioration in the situation, and warn it against continuing with this insulting policy in such a way that will lead to reactions on the ground."

Muslim Prayers next to the shuttered compound on Temple Mount

Hamas is also trying to take advantage of the tensions, saying the recent chain of events is a warning before an imminent eruption over the site. Past experience has shown that campaigns carried out by the Palestinian Authority and Hamas with regard to the Al-Aqsa Mosque have often led to violent outbreaks.

On Monday night, Hamas-affiliated sources issued a call for Muslims to go to the al-Aqsa Mosque on Tuesday, for prayers at the Bab al-Rahema compound and to demand that the site be opened on a regular basis.