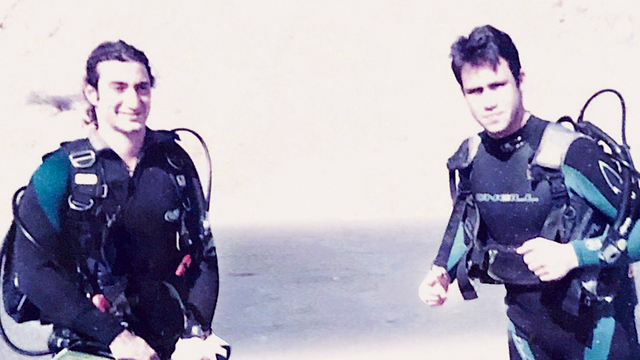 A family mourns the loss of two sons who died in similar circumstances, 15 years apart; 'we are like a plane that lost two of its engines,' says their bereaved father, Eli.

Tragedy struck the Fattal family twice when two of its sons were killed in two separate car accidents.

In 2004, Uri, a 23-year-old newly discharged IDF paratrooper embarked on the traditional post-army trip. While driving on a wet road in Brazil, his vehicle skidded and crashed into a high-voltage pole, with one of his cables landing on the car. Uri, who remained unharmed after the accident, opened the vehicle's door and was electrocuted.

Over the weekend, Omer, 40, was killed in a head-on collision in the Shfela region when his vehicle crashed into a car coming from the opposite direction. Omer's wife, Liron, was moderately injured after sustaining a pelvic fracture; and their three children aged 2, 5, and 7 were lightly wounded. An investigation has been launched into the incident. Omer was laid to rest on Monday.

Omer (left) and Uri Fattal (Photo: Courtesy of the family)

"After we lost Uri it was difficult. And then Omer was killed, leaving behind three small children, which is a whole different kind of pain," said Uri and Omer's father.

Uri was survived by his parents, Eli and Sheli, and his siblings Omer and Yaara.

Several years after his brother died, Omer, a veteran of the elite IDF Sayeret Matkal unit, decided to open a therapeutic farm for low-risk youths near Kfar Uria where he resided, with his former comrades serving as counselors. He named the center "Uri's Farm."

The farm was home to hundreds of troubled teenagers. Their time in the farm and the challenging tasks assigned to them introduced them to new horizons of hope.

"They took children who hit rock-bottom and gave them responsibilities in order to rehabilitate them. Omer, who chose to educate through actions rather than words, was a role model for these youths," Eli said, describing his son's life work.

Speaking about the tight relationship between his two sons, Eli said: "Omer is two years older than Uri, so their military service period overlapped. Both of them fought in Lebanon and took part in Operation Defensive Shield, sharing similar experiences. After they concluded their military service they traveled together to the United States and worked there."

"After losing both Uri and Omer we are like a plane that lost two of its engines. We'll continue flying with the engines we have left and move on. Each of the boys had a different character—Uri was happy and made people laugh. Omer was introverted and quiet," Eli said.