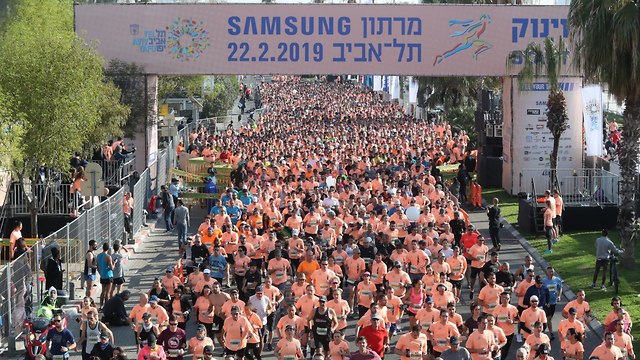 Netanyahu is the one who should be ashamed

Opinion: The prime minister has yelled 'shame' at his main political rival, but Benny Gantz is not the one who invented spurious claims against his rival, sought an alliance with Jewish fascists or used a national scientific wonder for his own propanganda

1. Last weekend saw the start of the real election campaign for the 21st Knesset, as well as the Tel Aviv Marathon. If you'd stood on the sidewalk along the route as tens of thousands of Israelis ran their way past, you would have been exposed to the epitome of effort, of sweat and the mutual encouragement, not to mention the moments of heart-warming fraternity.

There was no expression of the violent discourse that is characterizing the election campaign; there was no left and no right, no one was trying to shame anyone else. For a brief moment, you could feel that we were different from those who are seeking our votes, that we were displaying the very decency and integrity they lack.

2. Benjamin Netanyahu thundered "shame" at Benny Gantz after the latter claimed that while he had been defending the State of Israel, Netanyahu was sharpening his rhetorical skills in television studios in New York. In fact, this was a low and unfair blow. Not because of Netanyahu's reasoning – that he was an officer in the elite Sayeret Matkal unit who took part in defending the homeland - but because such bickering detracts from the real political discourse that should be taking place during this election campaign.

The person who should be ashamed of course is Netanyahu, who had nothing to say when his cronies claimed that Gantz's wife, Revital, was a member of MachsomWatch (left-wing female Israeli activists who record Palestinian experiences at Israeli military checkpoints). Netanyahu should also be ashamed of the ugly propaganda that falsely claimed that Gantz abandoned Madhat Yosef, one of the soldiers under his command, to die in the field. Gantz should not be ashamed - he is actually a product of the education system in Israel, and not of the one in America, where Netanyahu's parents resided.

"I reject any suggestion to be ashamed," says Heffetz, the eponymous protagonist and grotesque figure in a Hanoch Levin play. I would like to propose that Gantz and Lapid adopt this philosophy until Election Day. Netanyahu (who himself is suspected of multiple acts of bribery and corruption) and those responsible for his campaign will take any low, ugly and unfair step just to guarantee his political survival and save him from the threat of justice.

3. Rabbi Rafi Peretz, who was recently elected as the new leader of the Jewish Home party, was praised for his conduct during the 2005 disengagement from Gaza. Peretz, a helicopter pilot who was later appointed IDF chief rabbi, was wrapped in a prayer shawl as he instructed his students at the yeshiva in Atzmona not to harm the soldiers who had come to evacuate them.

But now Peretz is the central figure in the union that Netanyahu forged between the Jewish Home and the National Union and the students of Rabbi Meir Kahane from Otzma Yehudit, born of a desire not to waste a single vote for the right-wing bloc.

"When the house is on fire, you do not check the tzitzit (Jewish prayer shawl worn under clothes)," Peretz said - in effect an admission that there are no absolute values. Suddenly the rabbi also has no problem smearing Naftali Bennett or causing shame among the religious-nationalists.

4. We are told that the only thing that unites the heads of the Blue and White Party is the desire to replace Netanyahu. And I say, what's wrong with that? Overall, it seems to me that we aren’t looking for a blue and white king, but rather someone to show us that we can expect personal conduct different to that displayed by the current captain of our ship and his closest allies.

Moreover, Netanyahu claims that if Gantz and Lapid become the heads of the largest party in the Knesset, they will help the Arab parties to create an obstructionist bloc - even though these parties are interested in destroying Israel. This is a lie. Arab citizens of Israel are fully equal, and their parties deserve the public trust. In any event, Ganz and Lapid have not annexed Balad and Ta'al to their centrist bloc, as opposed to Netanyahu, who made sure to bring in Kahane's heirs and those who justify the massacre perpetrated by Baruch Goldstein.

5. Those who did not run in the Tel Aviv marathon could instead have followed the journey of the Israeli spaceship "Beresheet". Netanyahu took advantage of this wondrous event for election propaganda, praising his own achievements and claiming to have transformed Israel into a superpower.

But even without asking the scientists who they voted for, it is possible to assume that they are not in the Netanyahu camp. Furthermore, the spacecraft is now heading for the moon is not a ballot paper for the Likud party, it is an achievement that belongs to every citizen of the State of Israel.