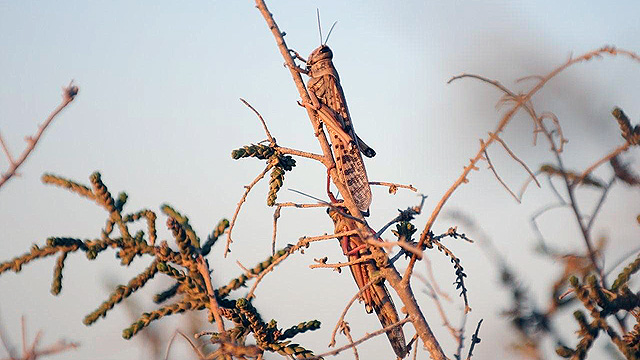 After heavy rainfalls hit eastern Yemen and the Sudan-Eritrea border, the insects are migrating to Saudi Arabia and are possibly en route to Israel, although chances of them arriving in the Jewish state are rather low.

The Agriculture and Rural Development Ministry is gearing up for the arrival of locust swarms in Israel, although chances of that are relatively low.

As part of the preparations, the Plant Protection and Inspection Services of the Ministry of Agriculture are in constant contact with the Food and Agriculture Organization of the United Nations in order to receive updates about the locust movement in Egypt and Saudi Arabia.

locust swarms in Israel in 2013

Meanwhile, the ministry has begun doing inventories on pesticides—which do not pose risk to human health—in order to use against the short-horned grasshoppers if the need arises.

Locust swarms do not pose danger to humans nor animals, rather constitute a mere nuisance while damaging agricultural produce.

After monitoring the locust movement following the heavy rainfalls that have recently hit eastern Yemen and the Sudan-Eritrea border, the Agricultural Ministry said locust swarms began migrating to Saudi Arabia.

A report produced by the UN shows that locusts are en route to Israel, however, they still have a long distance to go. The movement of the insects is expected to become clearer in the coming days.

In 2013, locust swarms entered Israel from the Sinai Peninsula. Most of the swarms were fumigated in the Negev, however, several of them managed to reach other areas in Israel.