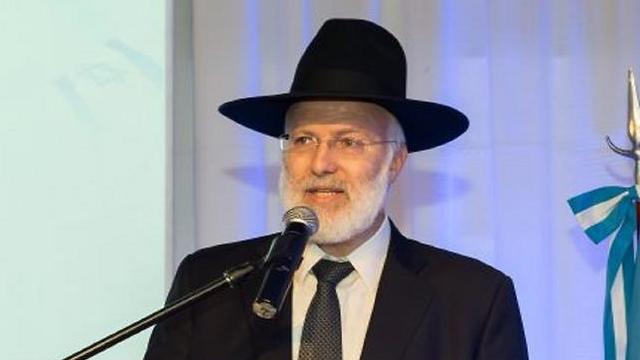 Attackers reportedly told Rabbi Gabriel Davidovich that they knew he was 'the AMIA rabbi' when they robbed him and brutally beat him and his wife; both were admitted to the hospital in serious condition.

Argentina's Chief Rabbi Gabriel Davidovich and his wife were savagely beaten in their Buenos Aires home in the early hours of Monday by unknown assailants in what has been decried by Jewish groups as an anti-Semitic attack.

According to local media, seven assailants, who had apparently been monitoring Davidovich's home in preparation, broke in at 2am, took money and jewelry and attacked him and his wife. The attackers reportedly told the rabbi "We know that you are the AMIA rabbi."

The rabbi was bound and hooded and was brutally beaten until he lost consciousness. The assaulted resulted in fractures in nine of his ribs and bruises all over his body.

Two Brazilian nationals who had witnessed the attack from a bus stop near the house alerted the police.

The Asociación Mutual Israelita Argentina (AMIA), demanded an immediate investigation into the attack and "expressed unease of the actions, which are undoubtedly a cause for alarm."

The World Jewish Congress was "shocked and incensed by the brutal attack against the Chief Rabbi of the Asociación Mutual Israelita Argentina, Gabriel Davidovich, who was savagely beaten by robbers inside his own home," said WJC CEO and Executive Vice President Robert Singer.

Singer added, though, that the WJC is "grateful that the authorities in Buenos Aires and Argentina are treating this matter with the severity and concern that it deserves. It is not yet clear whether this was a targeted crime of hateful anti-Semitism or a barbaric criminal act, but we trust that the authorities will continue to do everything in their power to determine the motive and bring the perpetrators to justice."

Yaakov Hagoel, the Vice Chairman of the World Zionist Organization, expressed concern by "recent anti-Semitic incidents, which point to a worrying trend that should alarm law enforcement authorities and governments and put the matter at the top of the agenda. They must uproot the danger before it erupts and it would be too late. I also call on communities around the world to lift up their heads and go out to the streets to protest."

Condemnations in Israel: Prayers are not enough

Minister of Diaspora Affairs and the head of the New Right Party Naftali Bennett said he was praying for the rabbi's quick recovery, "but prayers are not enough. World leaders must take a clear stance. Jewish blood is not cheap. It is time for action. World leaders in Europe, South America and other places are failing in their responsibility to learn the lessons of the past."

"But unlike the past, today we have Israel, and every Jew around the world must know they have a home here; we are waiting. But for Jews who want to live in Argentina, or France, or England, or the US or anywhere, we are also here. We will stand against anti-Semitism," he said.

"I call on Argentina’s government to make a very clear stand in words and actions - the criminals who did this must be found and brought to justice," Bennett said.

"We must fight the human garbage that originates and is motivated by the hatred of Jews, until we achieve its total elimination," Herzog said. "The Jewish Agency, along with the government and other Jewish organizations, will lead an international effort to fight against the terrible affliction that has been rearing its head in the most concerning manner."

Israel's Prime Minister Benjamin Netanyahu said that "We must not let anti-Semitism rear its head. I strongly condemn the recent acts of anti-Semitism and call on the international community to take action against it."

Israel's Foreign Ministry said the attack was "shocking and despicable," adding that "Anti-Semitism should be combated immediately and strongly wherever it takes place."