A young protester in Cairo in 2012 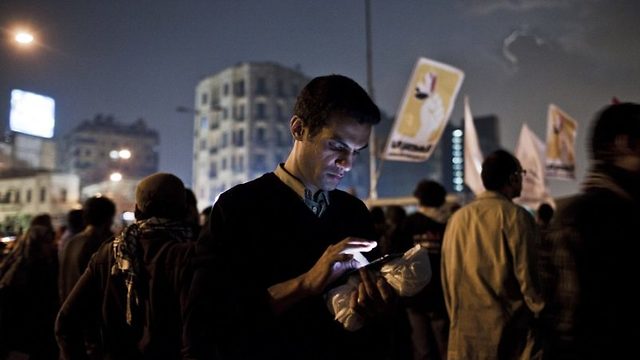 Observers of Egypt’s 2011 “Arab Spring” often point to social media as the glue that bound together opponents of former president Hosni Mubarak. Young demonstrators took to the internet to whip up a level of dissent that ultimately toppled his decade-long reign. They utilized Facebook and other platforms to organize demonstrations and spread the revolution’s momentum outward—from Cairo’s Tahrir Square to other Egyptian cities, sparking similar chants of unrest throughout the region. While the social media tools of that time afforded many a newfound voice, a forum for debate and an organizing mechanism, governments have since made strides to suppress that potentially disruptive power.

Hisham Fageeh, a comedian and actor from Saudi Arabia, is best known for a viral YouTube video he produced several years ago. Playing a conservative Saudi man, he made a parody of Bob Marley’s “No Woman, No Cry,” calling it “No Woman, No Drive.”

This was before the government last year changed its decades-long ban on women drivers, a reversal implemented by the young Crown Prince Mohammad bin Salman.

“Pop culture has been heavily centralized—controlled by specific cultural figureheads—especially in the Gulf,” Fageeh says.

“What new media did was decentralize it. People became very optimistic with technology. They thought this will be the saving grace but this view was certainly naïve or pre-mature because what ended up happening was that very powerful institutions took control of social media and mimicked the old dynamics.”

A protester uses his cell phone during a demonstration against former Egyptian president Mohammed Mursi in Cairo in 2012.

Still others believe the capability of governments to curb lightning speed technological change and control digital trends is slipping away.

Joe F. Khalil, Associate Professor of Communication at Northwestern University’s Qatar campus and an expert on Arab media, referenced the recent case of Rahaf Mohammed al-Qunun, the Saudi teenager who made global headlines after taking desperate measures to escape her family.

Fearing that relatives would eventually kill her for renouncing Islam, al-Qunun ran away while on vacation with them in Kuwait and boarded a flight to Thailand.

Upon arrival in Bangkok, she was reportedly greeted by an unidentified man who was in fact a Saudi embassy official. He informed her that he needed her passport to help her obtain a Thai visa. She handed it over but the man never returned. When Thai immigration officials stepped in and tried to deport her back to the Middle East, she barricaded herself inside a hotel room at the airport and began pleading for help on Twitter.

“That is precisely how these technologies have taken debates that used to happen behind closed doors and that used to be dealt with in ways that involved much suffering and violence and have given them a different life,” says Khalil.

The reaction of Saudi diplomats involved in al-Qunun’s case was telling, Khalil says. “They were cited as saying, ‘I wish we had taken away her phone, not her passport.’ The implications of such cases are now huge.”

Eventually, the teenager fled to Canada which granted her refugee status.

BREAKING: Rahaf Mohammed al-Qunun, the Saudi teen who was granted asylum in Canada after fleeing from her allegedly abusive family, has arrived in Toronto. https://t.co/o7KgEDfq0t pic.twitter.com/V0DUVf3UkN

While social media can be used toward humanitarian ends, Khalil cautioned not to underestimate the economic motives behind their rise.

“YouTube was one of those platforms that helped generate income for many prominent individuals. So, it is not just a matter of speech per se and activism, it is also a platform for money making.”

The popularity of Twitter as a textual medium is evident in many areas—manifest in religious and political debates to more mundane issues like celebrity gossip—but there is also growth when it comes to Instagram, Khalil concluded.

Dr. Pamela Chrabieh, a Beirut-based writer and activist, told The Media Line that young people in the Arab world are using Facebook, Instagram, Twitter, YouTube, WhatsApp and Snapchat at an increasingly faster rate despite government controls and restrictions.

“Several studies conducted in the last decade have shown that pop culture and social media have helped Arab youth express and promote alternative political and social discourses and practices to the ‘official, normative, and institutional’ ones,” she said.

Although social media offers opportunities for creative expression and interaction, Chrabieh explained, there are many young people who must use these mediums while constantly negotiating complex and layered pressures to maintain online identities that meet the expectations of their societies, especially in the Gulf region.

“Fageeh’s work (generating online videos, for example) is one of many initiatives in the Arab world that addresses social and political issues. In fact, there has been an explosion of artistic and cultural productions since the 2000s in the forms of music, poetry, theater, graffiti, movies, etc.,” Dr. Chrabieh noted.

“There are of course cultural icons or ‘figureheads’ but we are witnessing the rise and proliferation of cultural democratization and transnational cultures (global cultures), especially when it comes to street art, videos and digital expression.”

Popular culture in the Arab world should not be viewed as byproduct of the Arab Spring, she explained. Even before the uprisings, it played a significant role in creating social and political transformations in response to what she termed “Ottoman and European colonialization.

“Lastly, it is hard to characterize Arab pop culture as one category given the diverse political institutions, regional history and the many different discourses about identity. Nevertheless, popular culture can help make sense of this complexity.”

Dima Abumaria contributed to this report. Reprinted with permission from The Media Line