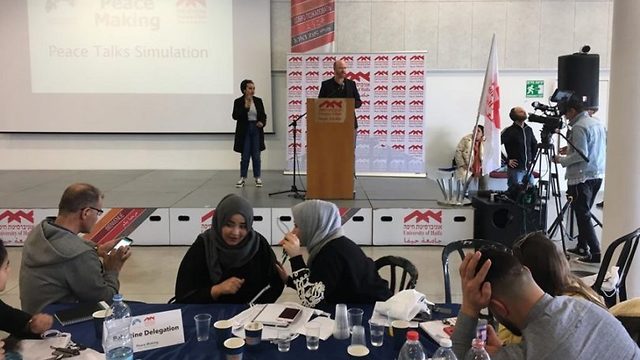 VIDEO: Some 150 university and high school students from both sides meet in Haifa to hash out trust building measures and practical solutions to the decades-long conflict

The congress—held in cooperation with the university and a non-governmental organization called Minds of Peace—united 100 university students and 50 high school pupils from all over Israel and the West Bank.

sraeli and Palestinian students engage in mock peace talks at Haifa University
The Palestinian negotiators were required to obtain permits and pass through security checkpoints to attend the event. Alaa Amro, a 23-year-old university student from Hebron, told The Media Line that for her getting to Haifa was difficult. “Considering my age, I have only two ways of getting a permit: either for medical reasons and (through work) with NGOs,” she said, explaining that it took five years to get the permission via the latter path.

To kick off the event, students formed smaller units which engaged in round-table discussions. At the end of the conference, each group was required to present two agreements, after hashing out their differences beforehand. One ground rule for the negotiations included a prohibition on entering into historical debate about the origins of the conflict or contentious issues of the past, as the focus was on improving present conditions.

The stated point of the congress is to motivate political leaders on both sides of the divide to engage in peacemaking efforts with an eye on practical results.

Tzili Charney founded the center in her husband’s honor. The late Leon Charney was a prominent lawyer who helped forge the 1978-79 Camp David Peace Accords.

“It is obvious that we want to create a platform for the two sides to discuss, maintain dialogue, come up with ideas and try to bring not even solutions, but an understanding,” she said.

“I don’t know that Israelis are really aware of the tough everyday life of the Palestinian side, and I don’t know also that Palestinians know how different it is for the Israelis, or how much they want to know. I think the younger the participants are the easier it is to work with both sides. They have less fixed ideas and are less emotionally loaded,” Charney added.

“It will be interesting to speak with the same kids when they grow older and see where they go with their opinions, and if they close in or open up,” she said.

When asked what has failed and what could potentially broker a peace agreement, Amro, the student from Hebron, mentioned the Palestinian intifadas or uprisings and previous peace deals, particularly the Olso Accords, which she contends have not resolved anything.

“Once we both agree that you got to live peacefully—either in two separated nationalities or in one country—this peace could be the only solution for this conflict,” she said.

“Once we raise awareness on both sides of a culture against violence, the awareness of trust building between two peoples, which is done through education… can we then facilitate the bigger issues,” Amro added.

Commenting on the Boycott, Divestment, and Sanctions (BDS) movement which seeks to apply economic pressure on Israel toward a peace agreement, she said support for it is widespread in her community. But in her view BDS is not working. “We (Palestinians) are coming here, in Israel, to work, which is also something that we don’t have to deny somehow. So, we are still using the things that have been produced in Israel.” Siyona Adranly, a 15-year-old Israeli Arab from Jerusalem, said that her experience at the event was revelatory. The Israeli responses to questions was particularly surprising, she said. “I always thought that Arabs were the only ones who lived in fear, but it makes sense that Israelis also live in fear because now they often expect to be hated.” Adranly believes that what could bring about peace is more understanding, communication and “more gatherings like this one.” Yoav Bushmits, 16, a student from Binyamina, related about a “strange fact” he learned at the event. “Palestinians see and are educated to regard Tel Aviv as the capital of Israel, not Jerusalem. This was a shock for me,” he said. He spoke about a heated dispute that took place at his round-table discussion. “The disagreement was basically nothing. It was a misunderstanding between the two sides. It started with the Palestinians saying they should have human rights after someone accidentally said they shouldn’t have these rights.” Furthermore, Bushmits added, there was also a lot of talk about the Gaza Strip and what should be done with it, but others were adamant that there should be separate solutions for the coastal enclave and the West Bank. Dr. Sapir Hadelman, who facilitated negotiations and founded Minds of Peace, told The Media Line that “usually in past congresses Israelis and Palestinians are all the time reaching peace agreements.” But during this conference, he added, “there was one table that couldn’t. I am sure that if we had more days, we could do so.” Nevertheless, he added, these events are important because they involve people and press policymakers. “Because if we are going to wait for the leadership it is not going to work,” he said.

When asked about the difficulty of avoiding historical debate, he responded that there is an Israeli and Palestinian narrative that cannot be easily bridged. The potential for disagreement in this regard would therefore be endless.

“For example, you can talk about the (Palestinian) refugees as a problem that has to be solved instead of fighting over if we (Israelis) deported them or they ran away. You cannot find a solution to this. So, try to focus on a problem and try to solve it.” Prof. Ron Robin, president of the Haifa University, told The Media Line that he found something unexpected about the congress. “And that is the level of depth that students who know not that much about the past are able to bring to this type of conversation. It has been quite amazing to see how sophisticated some of these conversations have been given the fact that most people here were born after the most traumatic events relating to the conflict,” he said. Prof. Robin took a slightly contrasting line from Dr. Hadelman when it comes to historical debate.

“You may know that I’m a historian by trade and so I find that type of directive a little bit problematic personally. I can see why that came out because the historical facts are not known by everyone and we are looking toward the future, not the past.”