Netanyahu giving a speech at the Likud official launch of the party’s campaign for the April 9 elect
Photo: AFP 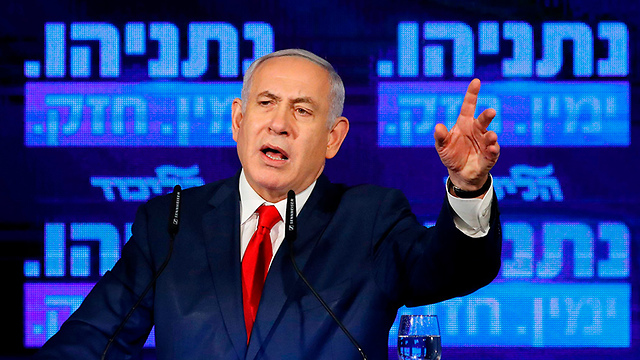 Prime Minister Benjamin Netanyahu slammed the left, the media and Blue and White Party head Benny Gantz on Monday, in a speech at a Likud Party conference to mark the official launch of the party’s campaign for the April 9 elections.

“The win isn’t guaranteed, it isn’t going to be simple,” the prime minister said of the upcoming elections, and accused the Blue and White Party of disguising what he said were leftist views.

Netanyahu giving a speech at the Likud official launch of the party’s campaign for the April 9 elections (Photo: AFP)

The prime minister went on to claim that his great achievements during his current term have been ignored by the media, which he said “broadcasts propaganda against us, the same brainwashing on television every evening.”

Netanyahu also slammed Blue and White Party head Benny Gantz for alleged poor verbal skills, saying that unlike Gantz, he himself “talks from the heart and doesn’t read out a pre-written script.”

He claimed that Gantz and Lapid would form a coalition with Arab parties, since they refused to create one with him and

In response, the Blue and White Party said Netanyahu “continues to incite and lie,” and that the prime minister is willing to say anything to draw the public discourse away from the investigations against him.

Attorney General Avichai Mandelblit last week indicated that he would seek to bring charges of fraud, bribery and breach of trust against Netanyahu, pending a pre-indictment hearing.