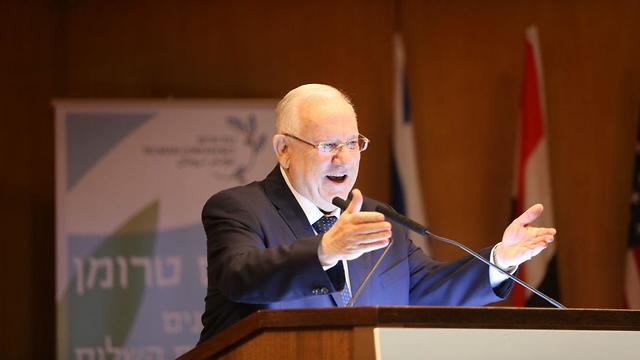 ‘All Israelis have equal rights,’ Rivlin says in apparent rebuke to Netanyahu

The president alludes to comments by PM that Israel is 'national state only of the Jewish people,' criticizing 'entirely unacceptable remarks about the Arab citizens of Israel'

There is no difference in equality between Jewish and Arab citizens of Israel, President Reuven Rivlin said Monday, in an apparent rebuke to Prime Minister Benjamin Netanyahu for saying that Israel is “the national state only of the Jewish people.”

The comments came amid a row between Netanyahu and prominent Israeli celebrities over the status of Israel's Arab sector, which makes up some 20 percent of the Israeli population.

Speaking at the ceremony marking 40 years since the signing of the peace treaty between Israel and Egypt, Rivlin said there are “no first-class or second-class citizens, and there are no second-class voters, we are all equal in the voting booth.”

“We must get to the point where we are truly able to say: no more war and bloodshed between Israelis and Arabs,” the president said. “This is the place to say this clearly: Recently, when political thinking is turning all reason on its head, we hear entirely unacceptable remarks about the Arab citizens of Israel. I refuse to believe that there are political parties that have surrendered the character of Israel as a Jewish and democratic, democratic and Jewish, state.”

The row between the prime minister and actress Rotem Sela began when she took to Instagram to criticize the way in which the right-wing government regards the Arab population, saying "When the hell will someone in this government tell the public that Israel is a country of all its citizens.”

Her comment prompted Netanyahu to respond that Israel is “not a state of all its citizens,” which in turn led Wonder Woman star Gal Gadot, to side with her fellow actress.

In his comments on Instagram, the prime minister said that all citizens, including Arabs, had equal rights, but referred to the deeply controversial law passed last year declaring Israel the nation-state of the Jewish people.

"According to the basic nationality law we passed, Israel is the nation-state of the Jewish people -- and only it," he wrote in response to Sela.

"As you wrote, there is no problem with the Arab citizens of Israel. They have equal rights like all of us and the Likud government has invested more in the Arab sector than any other government," he said of his right-wing party.

Netanyahu has been accused of demonising Israeli Arabs, who make up some 17.5 percent of the population, ahead of the April 9 polls in a bid to boost right-wing turnout.

He has continually warned that his opponents will receive the support of Arab parties and that they will make significant concessions to the Palestinians.