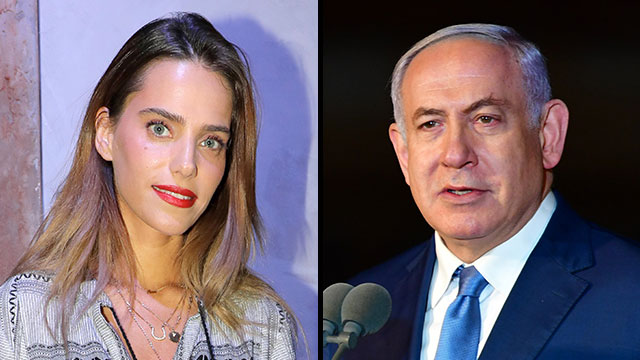 The Likud is the real threat to Israel

Opinion: While we are all busy watching Netanyahu attack a celebrity on social media, his party is busy with political plans that endanger the Jewish and democratic nature of the state

Two weeks ago, the Israeli swing voter seemed to be enjoying a brief moment in the spotlight. Thanks to Naftali Bennett, who opened the debate on Trump's "Deal of the Century" for Mideast peace, finally, at long last, a substantive discussion was on the table. But then the attorney general recommended that the prime minister be indicted, and the political debate was over.

Now all attention is on a social media post by Israeli celebrity Rotem Sela, to whom Benjamin Netanyahu has presumably already sent a bouquet of flowers. She gave him an opening; he seized it and now is setting the public agenda once again. While some were asking why the prime minister was busy fighting with a model, he was showing his superior understanding of what makes people tick.

Netanyahu is yelling non-stop about "leftists," when what he really means is "disloyal." There is nothing like an argument between supporters of a "Jewish state" and supporters of "a state of all its citizens" to really set public discourse on fire. And Netanyahu eagerly lit that match. It's not that Benny Gantz or Avi Gabbay are threatening Israel's existence as a Jewish state, but Netanyahu set a trap for them. He knew that while his political rivals would not back Sela, they would not criticize her comments. And this he could use.

He knew that anyone who was not him would be seen as supporting Sela. And that's exactly the situation he wanted to create: the Zionist Netanyahu versus the leftist bohemian. And the more bohemians back her, the more Netanyahu will smile all the way to the polls.

On its merits, Israel is a democratic Jewish state, and at the same time it is also a state of all its citizens. The extreme left, like the extreme right, claims that there is a contradiction between "Jewish" and "democratic." This is nonsense. Not only is there no contradiction, but the international community has repeatedly recognized the right to self-determination.

The struggle against imperialism and colonialism belongs almost entirely to national liberation movements, of which Zionism is one. And there is no national liberation without a national identity. The phrase "Jewish state" appears 29 times in the United Nations partition resolution, which does not violate the equality of rights of non-Jewish Israelis - but there is a difference between civic equality, which is a basic component of a democratic state, and a national identity enshrined in international law.

Netanyahu's rule has been characterized by a binary attitude toward Israel's Arab population. On the one hand, there is party rhetoric and agitation, with an unnecessary Nation-State Law that only caused harm. On the other hand, there is significant investment in the Arab sector that has led to narrowing the societal gaps over the last decade.

Most Israeli Arabs support integration. Repeated surveys make it clear that they want to be Israelis and are usually proud of that fact. The Arab leadership is another story. Even Netanyahu's sins pale in the face of the incitement by Hanin Zoabi, Raed Salah and Jamal Zahalka. They do not promote equality, they promote hostility and alienation.

And a final thought: Despite all the revulsion caused by the anti-Zionist statements from Balad and Hadash's sharp-tongued Knesset candidate Ofer Cassif, the real threat to the Jewish nation-state comes from Netanyahu's party.

How lucky they are to have a controversial social media post by a celeb, so that with the right propaganda, they can still control the message.