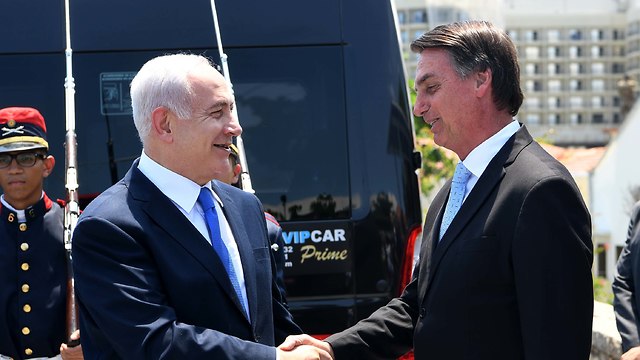 Brazilian President Jair Bolsonaro hosted Prime Minister Benjamin Netanyahu in December, and said that he plans to move Brazil's embassy from Tel Aviv to Jerusalem; will he deliver his promise during his upcoming visit, despite fears of losing his country's position as one of the world's top halal meat exporters?

Brazilian right-wing President Jair Bolsonaro will visit Israel at the end of the month but he may not be able to deliver on a promise to move Brazil's embassy to Jerusalem, a move opposed by military officers in his cabinet. A government official told Reuters on Wednesday that no decision has been taken on the embassy move, which could give Prime Minister Benjamin Netanyahu's standing a boost a week before Israel's elections.

Prime Minister Benjamin Netanyahu and Brazil's President Jair Bolsonaro during their meeting in Brazil in December (Photo: Avi OhayoGPO)
"Something will have to be said about the embassy during the trip," said the official with knowledge of the matter but who spoke on condition of anonymity. He added, however, that a formal announcement might not be made during the March 31 to April 2 visit as the Israeli government had hoped for. Visiting Brazil for the Jan. 1 presidential inauguration, Netanyahu said Bolsonaro told him that moving the Brazilian embassy in Israel to Jerusalem from Tel Aviv was a matter of "when, not if." But in an interview in February, Vice President Hamilton Mourao, a retired Army general, told Reuters that Bolsonaro's plan to move the embassy was a bad idea because it would hurt Brazilian exports to Arab nations, including an estimated $5 billion in halal food sales.

The Netanyahu's and Bolsonaro visitng a synagogue in Brazil (Photo:GPO)
The prospect of relocating the embassy - after President Donald Trump moved the U.S. mission - has worried Brazilian exporters who fear losing access to major Arab markets for halal meats, which comply with Muslim dietary rules. Brazil is one of the world's top halal meat exporters, and Islamic nations Iran and Egypt are its third and fourth biggest beef buyers, according to the Brazilian Beef Exporters Association. Bolsonaro's economic team and the country's powerful farm lobby have advised against the move, which would break with Brazil's traditional stance of support for a two-state solution to the Palestinian conflict. During last year's election campaign Bolsonaro stated that Palestine is not a country and said he would close the Palestinian embassy in Brasilia. Leaders of Brazil's fast-growing evangelical Christian churches have backed Bolsonaro's plan to move the embassy.