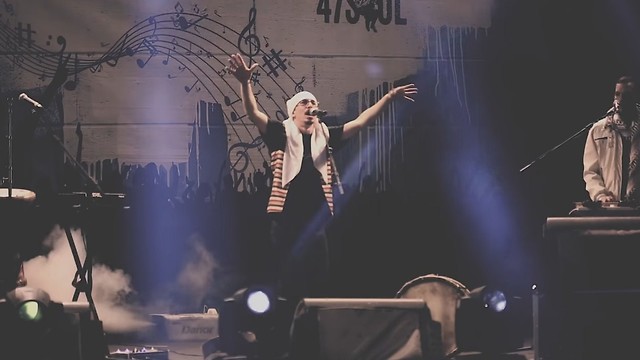 A Palestinian band that espouses love not war

The annual South by Southwest (SXSW) Music Festival in Austin, Texas attracts music fans from all over the United States. The Palestinian Electro Arabic Dabke band 47Soul performed this year and they chanted slogans against the Israeli occupation and for the brotherhood of humanity - to cheering crowds.

In some respects, the four band members personify the contemporary Diaspora Palestinian experience. Darbuka player Tareq Abu Kwaik (El Far3i) and electric guitarist Hamza Arnaout (al-Jehaz) were born in Amman, Jordan, to families from the West Bank; keyboardist Ramzy Suleiman (Z for the People) was born in Washington and moved to Ramallah as an adult; and percussionist Walaa Sbeit was born and raised in Haifa as an artist and social activist.

They work together in London mixing music from the West Bank, Africa and the West and write universal messages in Arabic and English, occasionally alluding to the plight of the Palestinians living under Israel control.

In Austin, the band found a receptive audience for their messages of political protest. When MC Sbeit shouted “This is a song against the occupation, against the oppression, against apartheid, this is a freedom song for Palestine,” the crowd cheered and grasped the reference without Israel being explicitly referred to. Some members of the audience waved Palestinian flags or wore the traditional Palestinian headscarf, while bearded hipsters, who in the Middle East would appear to be devout Muslims, applauded the music. If anyone didn’t failed to grasp the messages being shouted from the stage, they surely took notice of the music lyrics, especially from the band’s second album Balfron Promise. In their song Moving Around they sing, “My people were moved, other people were moved, soon we will all move, Yalla Yalla move.” In the song Locked Up Shop, they warn “Even if you subjugate me, you will never get away from it, even if you hide me.”

47SOUL (Screenshot)
Israel is never mentioned and hateful rhetoric is avoided, perhaps because they find a more liberal message more efficient. They not only engage in protest over the Palestinian plight but also against radical Islam in the Arab world, drawing inspiration from former South African president Nelson Mandela, former Egyptian president and Arab nationalist Gamal Abdel Nasser and Jamaican Reggae star Bob Marley. “From Africa to Palestine, weeping and turning over in refugee camps… All land is holy land, every nation is the chosen nation.” 47Soul’s first performance was on Thursday, at the same time that rockets were being launched from Gaza into Israel and the IDF was bombing Hamas targets in response. But reports from the front were not present on stage where the band was trying to seamlessly combine messages of protest and hope.

47SOUL (Screenshot)
Instead of the gun, they have chosen to wield the guitar; instead of hitting the police they prefer to hit the drum set and instead of burning tires they prefer to smoke a joint. In an interview Kwaik gave to the Egyptian website Cairo Scene, he even expressed reservations regarding the BDS movement which he supported in the past. "I had a BDS sticker on my guitar but then it was scratched and all that is left of it is the Palestinian flag, and it too is fading," said Kwaik, a son of parents from Jenin, who told how the assassination of his uncle shook his family who abandoned their secular lifestyle to became more religiously pious. "To a large extent it represents my thoughts on the situation in Palestine. For a long time, I supported BDS, but then I began to think that maybe this is not the best way to solve the Palestinian problem. It is a very important initiative, but recently I started to think that we did not conceive the Palestinian flag ourselves, the British did. And now, the flag on the sticker has faded and this symbolizes the changes in my world view," he explained.