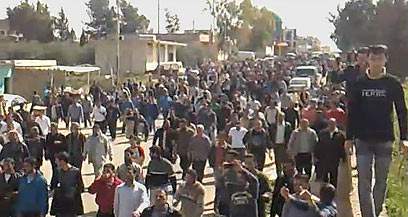 After eight years of civil war, can Syria be reassembled?

The figures are blurred, but the UN believes that a total of 11 million Syrians - almost half of the population - have been displaced, and it’s clear that it will take a lot of effort and an estimated $400 billion to put the country back together, if it’s to happen at all

March 15, 2011, is the date generally viewed as the beginning of Syria’s civil war.

On that day, demonstrators began taking to the streets in several locations to protest the arrest earlier in the month of several teenagers accused of scrawling anti-government graffiti in the southwestern city of Daraa.

Anti-regime protests in Daraa in 2011

The protests turned violent, and within days there were deaths on both sides. From that point on, the popular protests spread in terms of their breadth and depth, and rebel groups with various orientations, be they political or religious or both, began to spring up, all with an eye toward ending the regime of President Bashar Assad.

With the war this month having entered its ninth year, the death toll is universally recognized as being well into the hundreds of thousands. Millions have fled their homes and become refugees, either internally or abroad. Territory has changed hands, with much of it changing back again, and various anti-Assad armed groups are still holding some ground.

In addition, foreign powers, most notably Russia and Iran, have intervened with forces of their own, averting what had been the expected demise of Assad and even contributing to his resurrection, if only limited.

The death toll is often the first figure mentioned as a way of indicating the scope and cruelty of a war. However, according to Sara Kayyali, a Syria researcher at Human Rights Watch, the United Nations – the body one would expect to have the best and most comprehensive statistics – has actually stopped counting because there are so many contradicting numbers.

Russian airstrike in Syria (Photo: AFP)
“We rely on figures from local Syrian organizations, for example, the Syrian Observatory for Human Rights, which estimates that there are as many as half a million dead as of March 2019 – and it’s likely that this number is even higher,” Kayyali said. But there’s another statistic that often is overlooked. “The people who are wounded, especially those who have been traumatized, are people who go uncounted,” she said. “Usually the question is how many people are ‘in need,’ and you have over 13 million people in Syria who are in need, meaning they require support from humanitarian organizations, be it for shelter, education, food or medicine.” Kayyali added that in areas controlled by the Syrian government, groups providing aid often face difficulties accessing this cohort. (She used the term “black hole” as a way of describing a lack of transparency by government officials.) In other areas of the country, access might be a bit easier, she stated, but bringing in aid is not. “In Idlib (Province), there are groups in control that have been sanctioned by the UN as terrorist entities, and this makes it difficult for humanitarian organizations to serve the population in a way that is comprehensive,” she said. Clearly, after eight years of civil war, Syria is a mess, and it is not at all apparent what will emerge if and when the fighting stops. According to Dareen Khalifa, a senior analyst on Syria for the Crisis Group, a Brussels-based think tank, it will cost an estimated $400 billion to rebuild the country. “That is a bill that the Syrian government cannot afford,” she said, adding that outside investment will be difficult “unless Assad offers concessions” in terms of freedoms and governance. Khalifa said that 30 percent of Syrian territory and almost 80% of the nation’s resources remain outside government domination. “The local communities in those areas are going to try to rebuild with self-initiatives… but I can’t see a lot of major investment in the areas that Assad controls,” she said. “The West will be hesitant to invest without political reforms, and the only hope for that is probably pressure from Russia.”

Internally displaced Syrians in Idlib (Photo: AFP)
There’s also Iran. “The Iranian presence in Syria will be a great obstacle (to foreign investment) considering how hawkish the current US administration is,” Khalifa said, noting that western governments probably would not want to confront the Trump administration head-on. Obviously, the process of rebuilding Syria would have to take into account census figures, with entire apartment blocks – indeed, whole neighborhoods throughout the country – having been completely leveled after years of intense fighting, and so many people uprooted. The pre-war population was estimated to be about 23 million, but that’s no longer the case. Human Rights Watch’s Kayyali said that the office of the UN High Commissioner for Refugees (UNHCR) pegs the number of Syrians who have been internally displaced at over 6 million and an astonishing 5.6 million who have fled the country. “Obviously, the actual figures are likely to be even higher because the UNHCR (cannot account for) all those who have left,” she said. Many of these people are living in camps in neighboring countries such as Jordan and Turkey, but also in Greece and some Balkan nations. Others have moved on to Western Europe and often have to fend for themselves. The Assad regime, according to Kayyali, has officially called on Syrians who have left to return. Yet this might merely be a way to satisfy western demands for change. “There are people who tried to return to Syria based on promises made by the government, only to find that they were not allowed to return either by the security services or by the government itself,” she said. There have been media reports that these people are Sunni Muslims, whom Assad, a member of the minority Alawite sect, wants to keep out in an effort to achieve a more favorable ethnic balance, but researchers at Human Rights Watch have been unable to verify this.

A Syrian child at a refugee camp in Lebanon (Photo: Reuters)

“The policy of the Syrian government has been to restrict and even block the return of people based on criteria that has not been made available to us,” Kayyali said. “What we know is that most of the people who have been blocked have…expressed anti-government sentiment, even if they expressed this peacefully.”

What’s more, the Assad regime has been razing the homes of people who left, rezoning the properties for redevelopment or selling them to the highest bidder, something Kayyali claimed would affect the demographics of a post-war Syria – if you would even be able to call such a period one of peace. “We might not have airstrikes, and we might not have chemical weapons anymore,” she said, “but what we’ll certainly see is a war being carried out in terms of property rights and who gets to return.” When asked for numbers, Kayyali was hesitant to venture even a guess.

“The question of figures,” she said, “indicates just how complicated the conflict has gotten as it goes into its ninth year.”