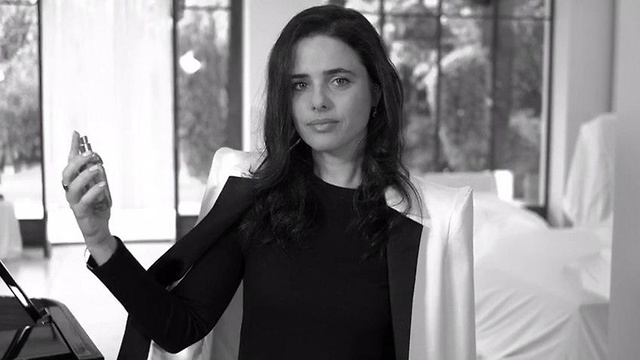 Opinion: The justice minister's new election campaign video is an anti-feminist piece that exposes many flaws in her 'revolutionary plan' for reforming Israel's judicial system; governance is good, but what she offers appears to be chaos

Putting to one side the embarrassing and anti-feminist messages in Ayelet Shaked’s election campaign video, in which she spoofs perfume ads to sell her political policies, the justice minister has some strong arguments against the Supreme Court. Others, however, are less strong - to say the least.

Our High Court has rightfully earned the distrust the Israeli public feels for it. It repeatedly intervened in governmental decisions regarding the separation barrier in the West Bank and the natural gas deal, and it even outright overturned Knesset decisions, like with the amendment to the Prevention of Infiltration Law.

Certainly the court’s recent decision, to disqualify Michael Ben-Ari from the upcoming elections while allowing Ofer Cassif to participate — is beyond explanation. It angered me and many others, even those who do not traditionally belong to the rightist, conservative political camp.

This decision paved the way for Shaked to offer what she calls a revolutionary plan for Israel’s judicial system. And as the disturbing memory of her video fades, there is definitely room to thoroughly examine what she has in mind.

“A judicial revolution,” whispers a voice in Shaked’s video, and its first step is the one most precious to the minister — a dramatic change in the way High Court judges are appointed.

There certainly is nothing wrong about reconsidering the way judges have been appointed here for decades, using a Judicial Selection Committee that includes both judges, ministers, MKs and representatives from Israel’s Bar Association. Shaked proposes that judges will be chosen by the government, according to the justice minister’s recommendation and after a hearing in the Knesset Constitution, Law and Justice Committee. She claims this is the way the procedure is done in most OECD countries, but that isn’t entirely accurate.

Appointing judges in the different OECD countries usually entails getting a majority in parliament or selecting from a list put together by a professional committee. While it is important to learn and think through options that other countries utilize, Israel should never be mistaken for being identical to other countries since our systems are very different. For instance, getting “the Knesset approval” on appointments is an empty procedure in a country where the parliamentary system allows the coalition pass any decision it desires, by installing a party whip. Things work very differently in the US Senate, where a hearing for judicial candidates is a long-standing tradition. In our raging Knesset, all on camera and with no such tradition, a hearing could end up looking more like a lynching in a city’s main square than parliamentary procedure. Any changes we might consider implementing need to be cautiously observed.

The second part of Shaked’s plan refers to appointing a judicial advisor for all ministries, chosen by the justice minister themselves. Governability, whispers the voice in the video. But seriously, Shaked, do you really think it makes sense that every minister brings along his very own associate advisor, to back them up on problematic issues while not being regulated by anyone?

And what will the next justice minister in line do when he or she inherits the advisor chosen by their predecessor? And what if that legal advisor rules contrary to what the justice minister feels is right? Should the advisor then be worried for their job? And who in this messy scenario will be dealing with the public?

Shaked further said that a minister who disagrees with his appointed advisor will be able to debate the decision in court, while represented by his own private lawyer. According to this new plan, when a legal disagreement pops up, either the justice minister or the government will be the one to decide on the matter, as long as the court doesn’t rule otherwise. So is it the minister or the government? It remains unclear.

Governance is important. I’m all for it. But what Shaked is offering could lead us to anarchy. I was a minister in five Israeli governments, and I’ve worked with several legal advisors. We argued often — sometimes I was able to convince them of what I thought was right and sometimes it was the other way around. Sometimes we agreed to disagree. It never even occurred to me to seek or demand private representation against them.

The third problematic offer Shaked made in the video is appointing Israel’s attorney general by government decree rather than a judicial selection committee. There is definitely room to create two different roles, of an attorney general and a prosecutor general. But not like this.

It’s clear to me some people are going to say I wasn’t brave enough when in the system, and that it’s easy for me to talk freely now that I’m out of it. Not at all. Among the various whispers in Shaked’s video there are some statements I absolutely agree with. Diminishing legal activism, pursuing separation of powers, governance. But how is appointing a legal advisor for ministers governance?

Madam Justice Minister, making changes and criticizing the system is legitimate. I appreciate your skills and abilities, but perhaps slow it down a little?