A 2-year-old orangutan looks out of a cage after being confiscated in Denpasar, Bali 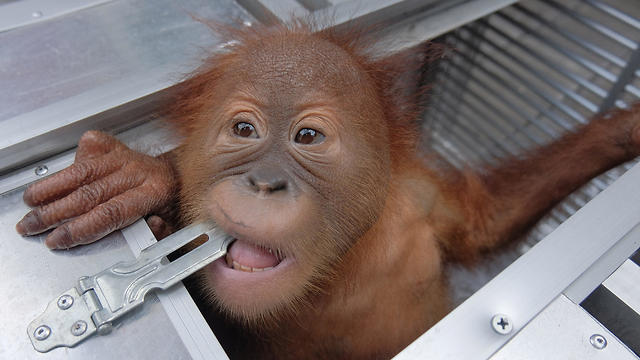 27-year-old detained at Bali international airport after customs officers found 2-year-old male ape sleeping in basket in his luggage, as well as two geckos and five lizards in a suitcase

DENPASAR, Indonesia  -- Indonesian authorities have arrested a Russian tourist who was attempting to smuggle a drugged orangutan out of the resort island of Bali, a conservation official said Sunday.

A 2-year-old orangutan looks out of a cage after being confiscated in Denpasar, Bali
Marbawa, whose agency is part of the environment and forestry ministry, said customs officers also found allergy pills wrapped in plastic, two geckos and five lizards in Zhestkov's suitcase. All the animals were alive. He said Zhestkov told authorities he fed the orangutan allergy pills mixed with milk, causing the animal to lose consciousness for up to three hours.

He said Zhestkov also told officials he bought the orangutan for $3,000 from a market on Indonesia's main island of Java after being told by a friend that he could bring it home as a pet.

Marbawa said Zhestkov had yet to be charged because police were still investigating to see if there were links to international syndicates involved in wildlife trafficking.

Marbawa did not know whether Zhestkov had a lawyer. He said the Russian mission in Bali had been informed about the case.

A caregiver bottle-feeds a rescued 2-year-old orangutan after a smuggling attempt at Bali international airport
Orangutans are listed as critically endangered by the International Union for the Conservation of Nature. Only around 13,400 Sumatran orangutans remain in the wild. A 2018 comprehensive study of Borneo's orangutans estimates their numbers have plummeted by more than 100,000 since 1999, as the palm oil and paper industries shrink their habitat and fatal conflicts with people increase.