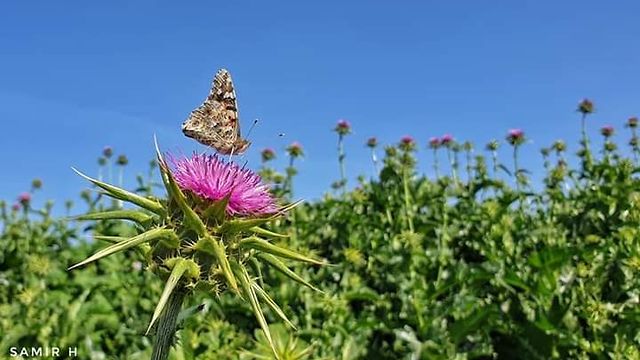 Millions of butterflies float into Israel

Colorful migration: In recent days, the influx of the Vannesa Cardui species has reached its peak, with thousands of the colorful winged insects crossing into Israel every hour; a total of 700 million to one billion butterflies travelling to Europe via Israel in search of food and breeding sites

In recent days, the number of butterflies in Israel has reached a peak, with migration from the Arabian Peninsula. Millions of Vanessa Cardui butterflies have been observed throughout the country, mainly in the center and on the coastal plain, but also in the Arava region in southern Israel, and all are on their way to Europe.

According to Noam Kirshenbaum of the Association of Butterfly Lovers in Israel, this is one of the largest migration events seen in Israel in recent years.

In 2014, a mass migration of similar dimensions was observed, and Kirshenbaum estimates that this year's migration is significant event that involves millions of butterflies.

According to Kirshenbaum, a sample survey he took showed that the rate of migration was on a scale of thousands of butterflies per hour, compared to just several hundred per hour in the previous event five years ago.

Vanessa Cardui butterflies can be seen throughout the year in Israel, but their population grew and some have migrated to the south of Israel in search of vegetation to eat and reproduce.

According to Dubi Benyamini, a butterfly researcher and chairman of the Association of Butterfly Lovers in Israel, Vanessa Cardui butterflies are a type of migratory butterfly that travels in groups for distances of thousands of kilometers, in the search for food.

"The migration is explained by the lack of food," Benyamini says. "Huge amounts of rain that fell in January and February not only in Israel, but also in the Arabian Peninsula turned the desert turned into fertile land."

But with their food sources drying up in the Arabian desert, the large numbers of butterflies migrated in search of food.

According to Benyamini, "an average of 700 million to a billion butterflies crossed into Israel just yesterday."

"There is an annual cycle of migration, particularly in the spring," he says. "They have internal knowledge, and they know that they will continue northward, crossing Cyprus and continuing to southern Europe to create their next generation."