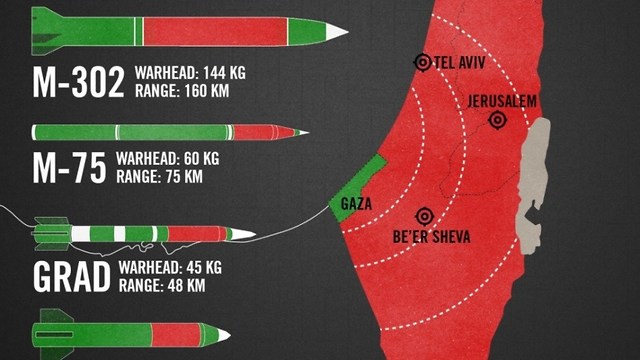 (צילום: רויטרס)
R-160: Hamas calls this its longest-range home-grown rocket. It was first fired in the 2014 war and at one point hit Haifa. The "R'' in the name refers to Abdel-Aziz Rantissi, a senior Hamas official who was killed in an Israeli airstrike in 2004. The number refers to the range, in kilometers. J-80: This rocket, also produced locally, is named after Hamas military wing commander Ahmed Jabari, who was killed in an Israeli airstrike on his car in 2012, setting off an eight-day war. Israel reportedly believes the rocket that hit central Israel on Monday was this model and blamed Hamas. The group has not claimed responsibility. M-75: Hamas unveiled this rocket in 2014, claiming it was homemade. But experts believe it is a version of the Iranian Fajr 5 rocket, which Iran acquired in the 1990s and is based on Chinese technology.