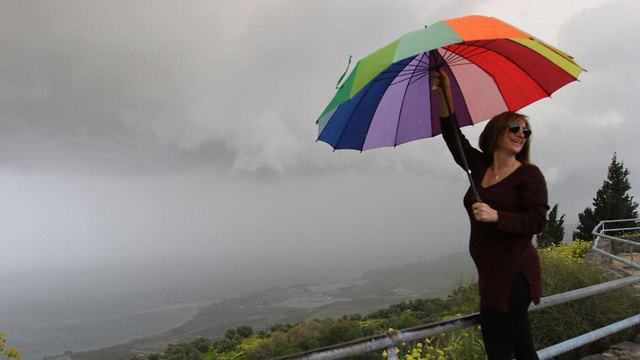 Last day of March in Israel marked by stormy weather

Unusually cold spring weather and heavy rainfalls hit most of the country on Sunday, bringing fears of floods and snowfall on Mt. Hermon; sinkhole - believed to be caused by showers - discovered in the middle of the street in a Tel Aviv suburb

Israeli resignedly reached for their raincoats on the very last day of March as heavy showers hit most parts of the country on Sunday. The temperatures will dip below seasonal average and rainfalls will be accompanied by thunderstorms and wind gusts in some parts of the country.

There are fears of flooding in eastern rivers and lower regions and snow is expected on Mount Hermon.

The Water Authority reported the water level in the Sea of Galilee went up by 4.5 cm (2 inches) since Friday, and by 2.57 meters (8 feet)since the beginning of Israel’s winter season. The freshwater lake is currently missing some 3.3 meters (11 feet) of water to reach full capacity.

Rainy weather in the Sea of Galilee (Photo: Avihu Shapira)

In the last 24 hours, Jerusalem saw some 28mm of rain, while Haifa saw at least 25mm of rain. Tel Aviv, however, saw only 5mm of rain overnight, but in the morning hours the rain intensified to the point that a sinkhole opened in a middle of a street in the city of Givatayim, east of Tel Aviv.

Meanwhile, the Ministry of Environmental Protection warned that high levels of pollution are expected in the Gulf of Eilat area due to a large cloud of dust blowing from the Sinai Peninsula in Egypt. High risk populations such as the elderly, pregnant women, children as well as heart and lung disease patients are recommended to avoid strenuous physical activity. The general public is also advised to stay inside.

According to the Meteo-Tech meteorological company, southwestern winds in the Mediterranean Sea will reach the speed of up to 40 kph (25 mph), while the waves could reach heights of up to 400 cm (13 feet).

On Monday, rainfall - accompanied by occasional thunderstorms - is expected in most parts of the country. There is a risk of flooding in eastern rivers and lower regions, with the temperatures remaining below the seasonal average. Snowfall will continue on Mount Hermon.

Tuesday will see a mix of sun and clouds with intermittent rain hitting northern and central Israel, with temperatures remaining cooler than usual. On Wednesday the temperatures are expected to warm up and return to seasonal average.