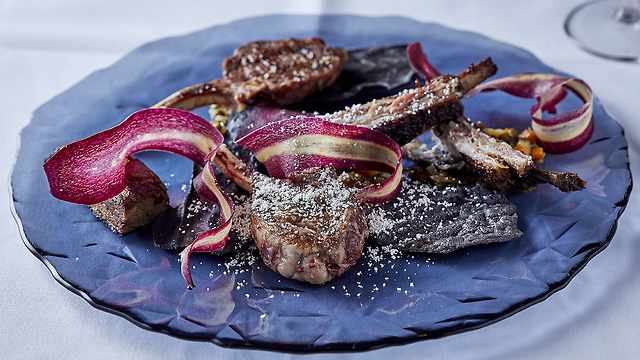 The master chef resurfaces at Nomi, his new boutique restaurant in an upscale beachfront hotel, where the rules of kashrut happily do not crimp his style

When the popular restaurant Bindella was closed in 2017 by its Swiss owners, fans of Yoram Nitzan -- previously the chef of the iconic seafood restaurant Mul Yam -- wondered where the legendary chef would end up next. Except Nitzan confounded everyone by simply disappearing from the country’s culinary scene.

When he finally re-emerged this winter, it was somewhere no-one ever would have imagined: at the helm of a kosher kitchen in a leading Tel Aviv hotel.

Nitzan’s new restaurant is Nomi, which replaces the hotel’s former fine dining establishment, Aubergine. Situated largely in one well-appointed room on the lobby floor of the David InterContinental Hotel, Nomi looks like an intimate place for a quiet dinner, but it can get a bit noisy when the room is full of conversing parties.

The menu at Nomi comprises just two sections: Starters and Mains. The former category contains, among other dishes, one soup, one salad and one vegan appetizer, while the vegan options among the main courses are two pasta dishes. There are no specialty cocktails, although the staff will order familiar ones from the hotel’s full bar. The carefully curated wine list is not extensive, but it boasts vintages exclusively from Israel’s finest wineries.

As soon as we had ordered, two red spheres appeared on our table. They turned out to be rather unique amuses bouches: chocolate filled with Campari, which exploded agreeably in the mouth and really opened the palate.

Next came a basket of four different kinds of bread, including spelt as a gluten-free option. The bread was accompanied by two delicious spreads: red pepper and eggplant with tehina.

Since it was a cold winter evening, we began with the soup du jour, made of root vegetables, primarily Jerusalem artichoke. The velvety soup -- which was poured tableside into a bowl containing cauliflower florets, duxelles mushrooms and Jerusalem artichoke -- was exquisite, and definitely warming.

Nomi's exquisite root vegetable soup (Photo: Afik Gabbay)
We could not resist trying the dish that seemed more appropriate on a brunch menu than as a starter in a fine dining restaurant: steak and eggs. The intriguing mini-tower of four components consisted of a medallion of veal as the centerpiece, perched on a brioche disk resting on a bed of parsley cream, and topped with a poached egg. The tender, flavorful veal fillet melted in the mouth, while all the ingredients came together in a harmony of flavors and textures. The main courses represented a nice variety of pasta, fish, fowl, beef, veal and lamb dishes, from which we selected the veal chop and the lamb medley. The veal chop was the largest I have ever seen in Israel: 350 grams of incredibly well-marbled meat. Beautiful to behold, and positively succulent to eat.

The lamb dish was also unusual, as it came in three forms: chops, shoulder and spareribs, accompanied by purple carrot.

The pink chops, the slow-cooked shoulder and the fatty spare ribs were all tender and juicy, yet each evoked distinctive flavors.

We appreciated the fact that we were offered tastes of wines before ordering a crisp rosé from Covenant and a very pleasant Cabernet franc-Syrah blend by Dada. The prices were not exorbitant, but very few vintages are available by the glass. The five desserts listed on a separate menu include two chocolate options, plus seasonal fruit sorbets made on site. This was the only part of the meal that was a little disappointing -- not because the desserts were not good, but simply because the names were misleading and led to unfulfilled expectations. The chocolate mille-feuille, for example, bore no resemblance at all to the desired layered phyllo dough and crême pâtissière confection; rather it was like a crunchy chocolate candy bar, topped with mango cremeux, surrounded by blueberry meringue, and garnished with sweet dried chili. Somehow, the whole added up to less than the sum of its parts.

Nomi apple pie: Could not overcome the lack of dairy (Photo: Buzzy Gordon)

Similarly, the apple tarte tatin recalled less the French pie made with razor-thin apple slices than a baked peeled apple on sablé Breton. The fruit and shortbread crust were perfectly adequate in their own right, but unfortunately accompanied by nondescript ginger “ice cream” that could not overcome its pareve constraint.

Regardless of the slight letdown at the finale, it is a distinct pleasure -- and great news for members of the religiously observant community -- to welcome a chef of the caliber of Yoram Nitzan to the ranks of Israeli kosher cuisine. Nomi @ The David InterContinental Hotel