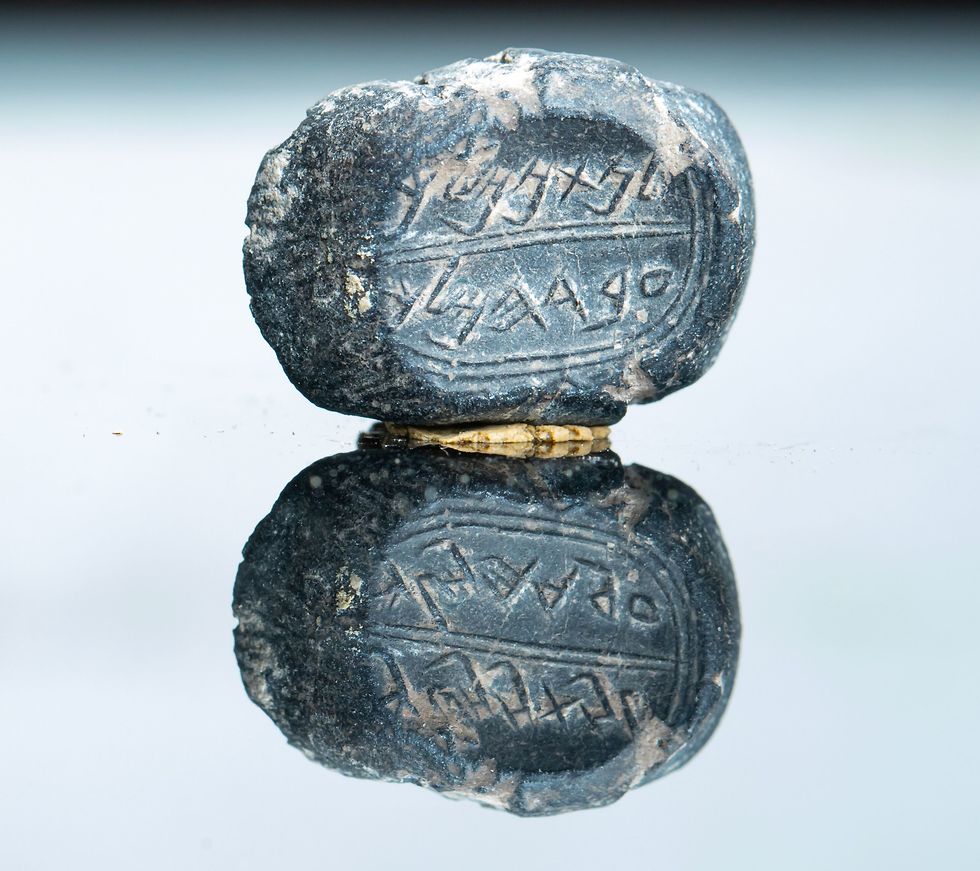 A seal and stamp dating back 2,600 years was discovered in an archeological dig near Jerusalem's City of David; finds were discovered in a structure that was destroyed during the Babylonian conquest of the city.

A stamp of stone and an imprint seal (bulla) dating to the end of the Kingdom of Judah — engraved with names in ancient Hebrew script — were discovered in archaeological excavations by the Israel Antiquities Authority and Tel Aviv University in the Givati site in the City of David, just south of Jerusalem's Old City.

The administrator of the dig, Prof. Yuval Gadot from Tel Aviv University and Dr. Yiftach Shelo of the Antiquities Authority, said that the finds were discovered inside of a structure that supposedly served as public building and was destroyed in 586 BCE.

Bulla
Large collapsed stones, burnt wooden beams and numerous pottery vessels were discovered in the building, attesting to a fire that took place there. The importance of the building is apparent from its size, the dressed ashlar stones from which it was built, and the quality of the architectural elements found inside the destruction layer, such as the remains of a polished plaster floor that collapsed from the second floor.

The seal and the bulla, about half an inch long, were deciphered by Dr. Anat Mendel-Gabrovich of the Hebrew University of Jerusalem and the Center for the Study of Ancient Jerusalem, which, according to the script, are dated to the middle of the 7th and the beginning of the 6th century BCE.

The seal
The seal, dated to the period of the first Temple, contains the text: "To Nathameleh the servant of the king." That name appears once in the Bible, in the Book of Kings II (chapter 23, verse11), as a eunuch in the service of King Josiah who took part in the religious reforms enacted by the king. The term "servant to the king" appears often in the Bible and refers to a high-level bureaucrat. The title appears on other seals and stamps found in the area. The researchers said that the uniqueness of the seal was that it is the first archeological evidence of Nathameleh outside of the Bible. Dr. Mendel-Gabrovich points out that the fact that the servant is mentioned by his first name indicates that he was well known and there was no need to add his family name.

"Although we cannot say with certainty that it is the same Nathameleh mentioned in the Bible, we cannot ignore the things connecting them. The name is rare both in the Bible and in archeological finds. Both refer to him as a confidant of the king and both are dated to the same time period... during King Josiah's reign," she said. The seal prints - bullas - were small pieces of clay used in ancient times to sign letters and were intended to keep the letters sealed on their way to their destinations. Although the letters did not survive the great fire that took place in Jerusalem during the destruction, but the stamps, which are made of ceramic-like material, were better preserved, leaving evidence of the existence of the letters, and even of the people behind the letters. The engraved seal, made of bluish agate stone, is engraved with the name "to Achar son of Matniyahu". According to Dr. Mendel-Gabrovich, "the name Matniyahu is known both from the Bible and from other seals, but this is the first reference to the name 'Achar.'"

Seal to Achar son of Matniyahu
Personal stamps were used to sign letters and were often part of a ring worn on a finger. In ancient times, they indicated the identity and status of their owner.

Givati dig site
According to the directors of the excavation, Prof. Gadot Dr. Shalev y, "Because many of the well-known seals and stamps did not come from an established archaeological dig but from the antiquities market, finding these items in a clear archaeological context that can be dated is very joyous. They join other seals and stamps bearing names written in ancient Hebrew script, which were discovered in the various excavations that have been conducted to this day in the City of David. These findings attest to the developed system of administration in the Kingdom of Judea and they add considerable information to the understanding of the economic status of Jerusalem and its administrative system during the First Temple period, as well as personal information about the closest officials and administrators of the king who lived and worked in the city." They added that the discovery of the communal building on the slopes of the City of David tells us a lot regarding Jerusalem from that time period and regarding the intensity of the destruction of the city by the Babylonians.