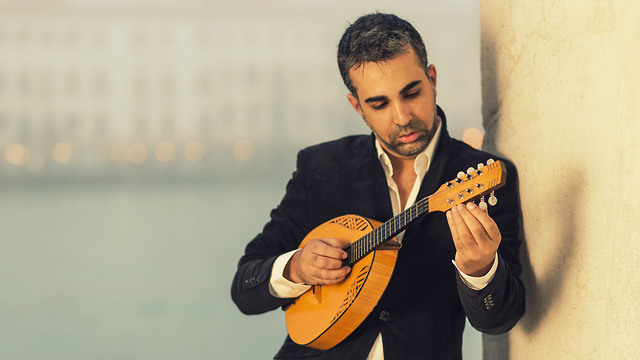 Maestro of the mandolin

A most unusual concert held at the Israel Conservatory of Music in March brought together two Israeli virtuosos of stringed instruments for an evening that was both entertaining and informative.

Mandolinist Yaakov Reuven
Tel Aviv Soloists Ensemble founder and conductor Barak Tal clearly enjoys his role as an innovator -- and educator. When he introduced the evening’s soloists, he had each one demonstrate the similarities between the violin and mandolin -- as well as the differences. The program designed by Tal was called The Seasons, featuring compositions both familiar and novel. The theme was seasons of the year, and the composers were primarily Antonio Vivaldi and 20th century Argentinian composer Astor Piazzolla, who was to become an audience favorite by the time it came to choose a piece for the orchestra’s encore. The concert began with Vivaldi’s “Spring” from the baroque composer’s iconic Four Seasons; here once again, Tal enlightened the audience with introductory remarks that enhanced one’s understanding of the motifs of the piece. This marked the first appearance of the evening of several for violinist Rubinstein, who acquitted himself very well.

Conductor Barak Tal
Vivaldi’s compositions alternated throughout the concert with pieces by Piazzolla, each also bearing names evoking the seasons of the year. Piazzolla’s lively music was engaging, as might be expected from a composer who is also identified with the music of the tango. While Vivaldi and Piazzolla dominated the program, the ensemble also played one somber piece by Tchaikovsky, October, in memory of a long-time supporter of the Tel Aviv Soloists Ensemble. The highlight of the concert was without a doubt Vivaldi’s Concerto for Two Violins, arranged this evening for one violin and one mandolin. Tal ventured to opine that this is probably the first time anywhere that this piece was performed by violin and mandolin; the audience certainly appreciated this unique interpretation, rendered flawlessly by Reuven and Rubinstein. The next concert of the Tel Aviv Soloists Ensemble, scheduled for May 26, 2019, at the Israel Conservatory of Music, will feature violinist Itamar Zorman, winner of the 2011 Tchaikovsky International Violin Competition. Zorman is slated to perform Mendelssohn’s Concerto for Violin in D Minor, Tchaikovsky’s Serenade for Strings, and Ayal Adler’s Lines, Interrupted, for Violin and Strings.