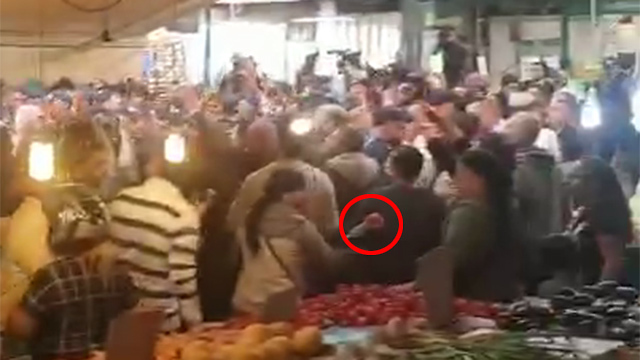 Opinion: The prime minister is relying on a tried and tested political trick of pitting 'us' against 'them'; but a vegetable hurled at him during a visit to what should have been a stronghold has let his camp fearful that cracks are beginning to form in his united front

A video showing a young woman throwing a tomato (or perhaps a red pepper) at the prime minister during his tour of Tel Aviv's Hatikva Market was bad public relations for Benjamin Netanyahu and his election campaign.

It was so bad that Netanyahu's Likud Party rushed out a message suggesting that the rival Blue and White Party was at least behind the distribution of the video, if not directly involved in the incident itself.

Likud did not like the publication of the video or that it went viral both on social and mainstream media. They apparently fear a crack in the wall of the "us versus them" mentality that the prime minister and his people are so busy promoting.

The video may reflect a reality different from the one that Netanyahu and his people are working to create in the minds of Israelis. That's also why senior Likud Party members do not want to be interviewed about the video. If it were up to them, they would have erased the whole event from memory.

Netanyahu's tactic in all recent elections is to divide Israeli society into two distinct camps: "us" versus "them." The people who work and shop in the markets are an integral part of Netanyahu's camp - the "us". They are an essential component of his base.

Therefore when he tours the markets, Netanyahu must be met with nothing less than 100 percent support and sympathy. Market people are also the essential part of the struggle against "them" – namely, the media and academic elites, the liberal left and the ideological secular camp.

The market people who are part of the struggle against every group that threatens the continued rule of the right-wing, the "us," the right-wing-traditional-religious-Mizrahi etc. There are two distinct camps here and very single person is either for us or against us. This is the spirit of the struggle and what keeps them united.

The spirit of struggle is necessary because, among other things, the "us" is not actually a distinct group, but rather a diverse coalition of different streams whose sole connection is the struggle. After all, there is not necessarily a natural link between the vendors of a market in Tel Aviv and the settlers of the West Bank hilltops.

Nor is there an obvious connection between the residents of a development town, the Likud supporters of the free market and the members of the right-wing conservative intellectual elite, who on Tuesday evening held a very large conference which Netanyahu attended directly from the market.

These are disparate groups by nature – and makes them a cohesive force is the struggle against "them."

This tactic not invented by Netanyahu, but rather by the first Likud prime minister, Menachem Begin. It was a speech by Begin at a 1981 election rally following a derogatory remark ("chachachim") about Israelis of Arab descent by comedian Dudu Topaz (clearly a member of the "them" camp) that until this day remains the founding moment of this alliance.

And it is fear that this division will end that worries Netanyahu, as it would create a crack in the edifice of his joint front.

This is why Netanyahu keeps repeating again and again the messages that warn against complacency by the "us" camp. This is not your regular eve-of-elections campaigning – the fear is real.

When the "mob" hurled a tomato was thrown at Shimon Peres (Begin's 1981 opponent and a member of "them"), he consolidated his camp behind him. But what Peres referred to as "mob" is for Netanyahu is an essential part of the "us." And next week it will be clear whether this "us" has led him to victory once again.