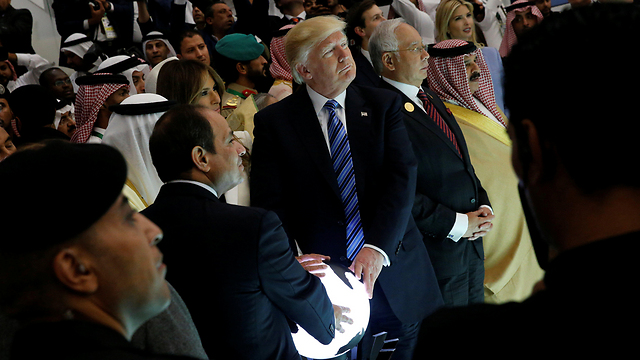 Cairo looks outward to keep Sisi in charge until 2034

As he heads to Trump meeting in Washington, the Egyptian president is counting on the US valuing his skills at securing regional stability enough to help him stay in power, and there is very little domestic resistance

CAIRO - Sources close to the administration of Egyptian President Abdel Fattah el-Sisi are looking to US President Donald Trump to endorse moves in Cairo’s parliament allowing the former field marshal to run for two further presidential terms after his current mandate ends in 2022.

The measure potentially extends Sisi’s term through 2034, with the additional six-year stints aimed at ensuring continuity at the top of the country’s power structure.

Sisi and Trump at a summit in Riyadh (Photo: Reuters )

On April 9, Sisi heads to Washington, where he will meet with Trump to cement “Egypt’s longstanding role as a lynchpin of regional stability,” according to a White House statement issued on Friday.

“We know Trump operates according to pragmatic logic, and he is betting on the survival of the Sisi regime to achieve his interests in the Middle East,” Mahmoud Abhosh El Shahin, an analyst at the Giddar Center in Cairo, told The Media Line. “Egypt’s regional position in the formation of an alliance with Saudi Arabia against Iranian influence and in supporting peace consultations between Israelis and Palestinians means Trump will accept these amendments,” El Shahin said.

Plans for extending el-Sisi’s term – formally unveiled in court last December – have not changed the Trump Administration’s 2020 budget of $1.3 billion in military assistance for Egypt.

Last week, Egypt’s parliament organized a series of “social dialogue sessions” aimed at demonstrating support for the proposed amendments, which include provisions to preserve the military’s role in governance, give the presidency expanded legislative powers by creating an upper chamber whose members will be appointed by the head of state, and more executive control over the judiciary. “President el-Sisi was supported by the public in last year’s election and was able to stabilize the country,” Parliament Speaker Ali Abdel Aal said. “We should give him the chance to complete his development programs and continue the fight against the terrorist organizations threatening Egypt.”

An overwhelming majority in the lower house agreed. Of 596 representatives, 485 backed the amendments in principle last month. Even members of the house’s Human Rights Committee have called for quashing dissent over the proposed measures by, inter alia, revoking the citizenship of activists who express opposition in Washington, Brussels and other Western capitals.

Petitions were filed last week with the attorney-general’s office demanding that exiled artists Amr Waked and Khaled Abu El Naga be tried for treason after criticizing the regime from abroad. At the same time, Abdel Aal has tried to maintain the appearance of open discussion on his own efforts to reverse key provisions of the 2014 Egyptian constitution. Those provisions give – at least on paper – the impression that the country has embarked on a “roadmap to democracy” in the wake of the 2011 uprising that toppled Hosni Mubarak and the 2013 protests and military intervention that ousted Mohammed Morsi. “A healthy community allows multiple opinions,”Abdel Aal said during Saturday’s televised dialogue session. “We must bear with all opinions, as long as they do not affect the security of the country, the law or the constitution.” But there may yet be some limited changes to the amendments due to specific objections emanating from inside the parliamentary chamber, where many deputies oppose a 25% quota of seats for women and question of the need for a revived upper house.

Slots earmarked for women, Christians and people with disabilities have been a key component of the administration’s inclusionary efforts, which people here believe is either a genuine presidential concern or merely a public relations effort aimed at Washington.

“This quota for women’s seats contradicts Article 53 of the constitution, which states that all citizens are equal and there is no discrimination,” independent MP Mustafa Bakri told the Al Ahram Weekly. “Before 2013, we had a second house, the Shura Council, which we abolished because it was costly and toothless.So why create another expensive chamber now, with symbolic rubber-stamping powers?”

Protests in Tahrir Square in Cairo in 2011
Liberal opponents of the term-extensions for Sisi and the consolidation of legally enshrined military “guidance” for Egypt’s government are questioning how much the authorities will tolerate dissent before the amendments are brought to the public in a referendum expected to be held before Ramadan begins on May 6. A US diplomatic source told The Media Line that he had already seen a document issued by Egypt’s National Committee for Elections detailing requirements for international observers to monitor the balloting. Mohammed Anwar Sadat, a nephew of assassinated president Anwar Sadat and a leader of the liberal Reform and Development Party, said he hoped that he and others would not be hindered in expressing their views. “God willing, there will be a referendum with clear guarantees and criteria, and we will be able to participate and come out to say our opinion, which is “no” to constitutional amendments,” he said.

Sadat was speaking on the sidelines of a news conference held in Cairo on Wednesday by a coalition of opposition leaders called the Civil Democratic Movement CDM, where he, together with CDM spokesman Magdi Abdel-Hamid, characterized the amendments as an attempt to “demolish liberties, democracy and the existence of a civil state.”

Article written by Mina Nader. Reprinted with permission from The Media Line