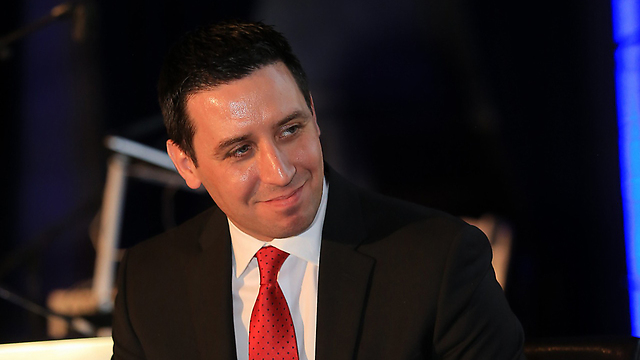 Ynet's senior anchor Attila Somfalvi has been awarded a certificate of merit by B'nai B'rith International for his coverage of the relationship between Israel and the American Jewish community.

His series "Near Far," which examined the ties between Israel and US Jews, was published last year on Ynet's Hebrew edition.

Somfalvi, 40, began his career at Ynet almost 20 years ago, as a police correspondent. He was later the political party beat, and since the establishment of the Ynet studio, has been its chief anchor, political commentator and senior writer.

The recipient thanked the jury for his award, and highlighted the importance of ties between Israel and the US Jewish community.

"I am proud and moved to stand beside such professional and profound journalists as Antonia Yemin and Zvika Klein, and I thank the B'nai B'rith judges for mentioning my work on American Jewry," Somfalvi said.

"I write about the Jewish people with great pride and great concern, and will continue to do my best to increase interest in our relationship with our brethren."

"I am proud of the tribute that Attila Somfalvi has received from B'nai B'rith," said Yon Feder, editor-in-chief of Ynet. "Attila explores the complex issue of Israeli-American relations with sensitivity and resolution.

"The connection between Israel and the Diaspora has undergone a profound change in recent years, some say a dangerous one, and coverage of this is of primary journalistic importance and a clear manifestation of our responsibility to the public."

Jewish Agency Chairman Isaac Herzog also congratulated Somfalvi on the award for an issue "that is vital to the future of the entire nation. It's important that you put the issue on the agenda of the (Israeli) media."

The chairman of B’nai B’rith World Center-Jerusalem, Haim Katz, and its director, Alan Schneider, said: "The interest and insightfulness shown by these fine young journalists in the lives of Diaspora Jewish communities and in their relationship with Israel is heartening and proves once again that this issue continues to fascinate the media and general population in Israel. Through this award, we seek to continue to encourage fine journalism in this field and urge editorial boards to invest more attention and means in it.”

The awards ceremony will be held on July 3, and will feature Prof. Deborah Lipstadt as keynote speaker