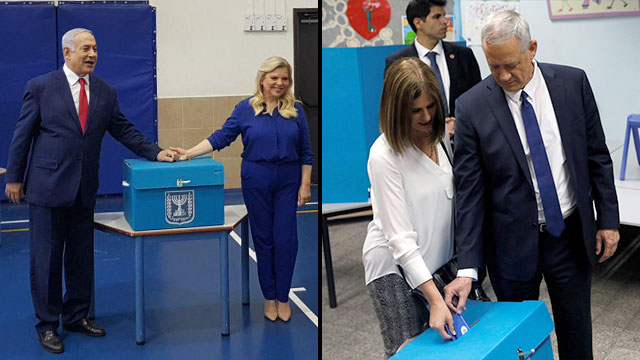 PM was the last of the high-profile candidates to vote, with his main challenger making early morning appearance at polling station in his Rosh HaAyin hometown; voter turnout so far appears lower than in 2015 election

Leaders of the main political parties in Israel came out Tuesday to exercise their voting rights in their respective hometowns, in what is expected to be a close contest between the ruling Likud and Blue and White party. Voter turnout by 2pm appears to be lower than in 2015 elections, and currently stands at 35.8 percent.

Prime Minister Benjamin Netanyahu - who earlier took to social media to directly address the voters - cast his vote in a polling station near the Prime Minister’s Residence in Jerusalem.

"Voting is a holy act, the very essence of democracy," Netanyahu said at the polling station, where he arrived with his wife Sara.

When asked about the issue of hidden cameras being placed by Likud supporters in Arab polling stations, the prime minister said surveillance cameras “should be everywhere to ensure a kosher voting process."

The premier’s main challenger, former military chief Benny Gantz has also cast his ballot, calling for a "new dawn, a new history" for the country. Gantz voted earlier in his hometown of Rosh Haayin in central Israel alongside his wife, Revital. He called on all Israelis to get out and vote, saying they should "take responsibility" for their democracy.

Gantz's Blue and White party colleague, Yair Lapid, claimed that his party is "just a step away from victory … We need two more seats to win these historic elections in Israel. A vote for any party except Blue and White is a vote for Netanyahu."

Gantz meets with supporters in Ashdod after casting his vote (Photo: Avi Roccah)

“For 50 years, my wife and I have voted together. I hope and pray, and am sure, that we will do it together again next time, here near our home,” Rivlin added referring to the recent hospitalization of his wife following a lung transplant.

Labor Party Chairman Avi Gabbay - who accompanied his wheelchair-bound mother Sarah to a polling station in Jerusalem - said she is voting for his party for the first time in her life. “There are many others like her, who read our platform and will, for the first time, vote Labor today,” he said. “You’ll be surprised by how many people will vote for us.”

Kulanu party founder and chairman, Moshe Kahlon, cast a ballot in his hometown of Haifa and expressed optimism over the election’s outcome despite sliding down in the polls prior to the vote, adding that he “without a doubt” believes he will stay on as a treasury minister in the next government.

Yisrael Beiteinu Chairman Avigdor Lieberman slammed the prime minister at the entrance to his polling station in the West Bank settlement of Nokdim. "Netanyahu's recent hysteria is meant to harm the right-wing parties in order to weaken them, because Netanyahu has already promised to transfer $40 million to Hamas,” said Lieberman.

Meretz Chairwoman Tamar Zandberg, who voted in Tel Aviv, called it a “fateful” day. “We depend on all those women, and people in general, not to be dragged along by the big parties, but rather to keep Meretz safe … because it means keeping the left in the Knesset safe."

By Wednesday afternoon, the results of some 90%-95% of the vote will be published, and by Thursday evening or Friday morning, the final official results - including ballot boxes from the IDF polling polling stations, hospitals, prisons, detention centers and the Israeli diplomatic missions abroad - will be available.