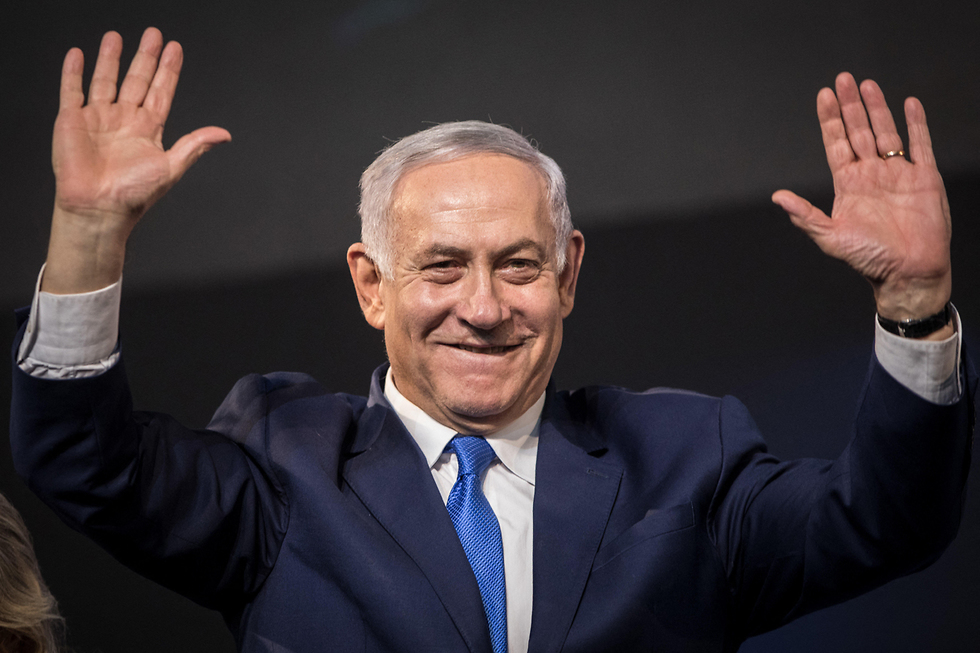 Israeli voters showed they like things just the way they are

Analysis: To a thriving and growing middle class, Netanyahu's argument that he would change little made him a more appealing prospect than his Blue and White opponents, despite few true differences between them

The Israeli public has spoken. They want the Likud led by Benjamin Netanyahu, in cooperation with the ultra-Orthodox and with a pinch of a more nationalist right-wing parties. They do not want to deviate from Netanyahu's path; they feel good with what they have.

This message is different from the one conveyed by ads and analysis during the election campaign, which determined that this vote boiled down to either "Yes to Bibi" or "No to Bibi." This was an incorrect  assessment: It's for or against change. Change, as it turns out, is unacceptable to most of the public. Amendments, yes; revolutions, no.

The exaggerated preoccupation with Netanyahu's personality concealed a deep-seated phenomenon in public opinion: a massive shift to the political and economic right. The shift took place mainly in the strengthening, prospering and growing middle class. This is a class that has enjoyed a decade of economic prosperity, a rapid climb in the socio-cultural ladder, along with a decline in the understanding of the conflict with the Palestinians.

The Likud party and the Blue and White party each received an equal share of the vote, and an equal share of the Knesset, but in reality they do not differ in ideology, unlike the Conservative and Labour parties in Britain. There will be one dominant party, the Likud, alongside the heterogeneous Blue and White, which from the beginning presented itself to voters as a kind of Likud II, only without Netanyahu.

Turning away from the political left went hand-in-hand with turning away from the socioeconomic left. The basic concept of a state with an advanced social welfare system has given way to the idea of compassionate capitalism that is characteristic of conservative and populist movements.

There is no better evidence to show the transition to the ideals of the economic right than Kulanu's votes being halved since the 2015 elections. Apparently, Kulanu leader Moshe Kahlon put an emphasis on social issues and in the Israel of 2019, there are no buyers.

Nor were there any buyers for ethnic divisions. The Likud refrained this time around from dabbling in ethnic propaganda, and despite the fact that the party did not hesitate to show off its Ashkenazi leadership, it still got five more MKs compared to the 2015 elections.

Shas also gave up on the ethnicity-based slogans of the previous elections and like the Likud increased its number of MKs. Kahlon and Labor Party leader Avi Gabbay did try to make gains from ethnic tensions and both saw losses at the ballot box, while the ephemeral Zehut party headed by Moshe Feiglin was only a bloated media balloon that failed to pass the threshold and in doing so exposed the flaws in pre-election surveys.

The really troubling fact of this election is that the leaders of Likud and Shas - main parties in Israel's next governing coalition - are facing serious criminal allegations. Yet not only do their constituents not care about this, it even drove some of them to vote for these parties.

Netanyahu's tactic of creating a reassuring image of "Mr. Continuance" worked well for him. He claim that, "those who want more of the same, those who believe me and not 'them,' will vote for me" was more convincing than those who said that the Netanyahu era was over.

This was not the right way to attract voters from their traditional voting bloc to a new voting one. The voters ultimately preferred to trust the country to Netanyahu, who was perceived as a rightist, nationalist, stable and global statesman - a reflection of the right-wing momentum in Israeli society.