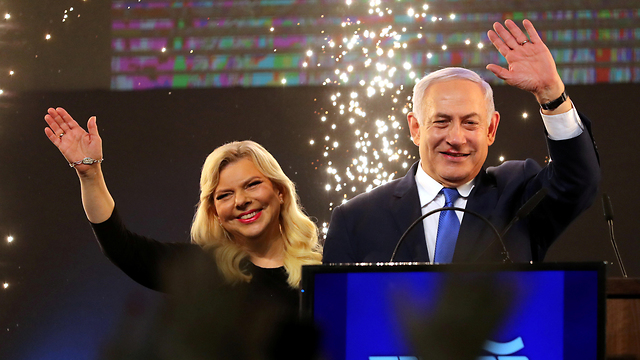 Netanyahu must heed the will of all the people

Ultimately, no one is better than the prime minister knowing how to read a room and reach those in it; so now, at the peak of his victory, he must do what all great leaders do and strive for unity.

The flashy fireworks that broke out in the wee hours of election night behind Benjamin and Sara Netanyahu were more than appropriate. I cannot remember such a scene in any other election campaign - certainly not in 1977, when Menachem Begin was elected prime minister and ended almost 30 years of Labor domination nor in Netanyahu's historic victory over Shimon Peres in 1996. But the current elections were really something else.

Netanyahu stood alone against three retired IDF chiefs, after the attorney general announced that he intended to file serious corruption charges against him, pending a hearing, with the media constantly coming up with new or recycled information to reinforce these allegations. And despite it all, he won.

The Netanyahus celebrate with fireworks on election night (Photo: Reuters)

And Netanyahu? Alone save for a virtuoso talent shared by just a few people in the entire world, he made the audience forget these allegations of corruption by changing the agenda. He knew to arrange for Donald Trump to recognize Israel's sovereignty over the Golan to coincide with a campaign that not even Hamas rockets succeeded in derailing.

Only Netanyahu decides. When he so desires, he brings his senior Likud party members in close or pushes them away. He runs his campaigns alone; a super-expert who does not rely on the advice of gurus.

He is the chief strategist and I would not be surprised if he is the lead writer on most of his speeches.

For four years he was not interviewed in Israel except on Channel 20. Until he launched his strategy and in the final two days of the campaign unleashed a blitzkrieg of interviews. He set studios ablaze with emotion and burning passion.

The voters believe and identify with him, and thus convinced, go out to persuade others. While I have not kept silent with my own criticism for some of his moves, the incendiary videos and statements may ultimately have contributed to his victory. As always, I voted Likud, and I am happy with the victory, but I stand by my criticism.

In the face of Netanyahu's effective messaging, Blue and White had a weak election campaign, hesitant, apologetic and lacking any determination.

Blue and White leaders had various opportunities, and they missed most if not all of them. The final fiasco - Gantz's victory speech - did not change the outcome of the vote, but left an image that tells the whole story.

Gantz declared in his speech that "the people have spoken." The people had, and what they said was "Netanyahu." The following morning Gantz was interviewed outside his home and he claimed that "the people support us." Could it be that the Blue and White party does not understand who the people are?

But now, at the height of his great victory, Netanyahu must do what a great leader does. His victory speech, in which he declared that he would be the prime minister of all Israelis, was an excellent start to his fifth term.

The next step should be a unity government, which will allow him to lead a coalition of more than six or seven small parties. In all modesty, it seems to me that when the two big parties have the same number of seats, this is truly the will of the people.