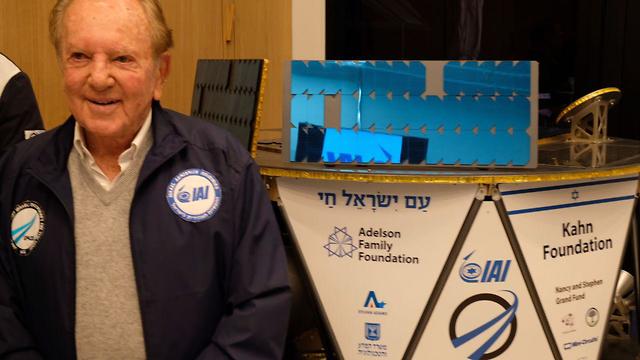 SpaceIL's Beresheet project set to begin a second try, after reaching the moon but failing to land, .

Millionaire Morris Khan, who donated much of the funds to the Beresheet project, announced he is ready to give it another go. "We've begun and should complete the mission? he said.

A new Beresheet space project is set to get underway after its benefactor, Morris Kahn announced he will finance a second attempt.

After its failed attempt to land, SapceIL's spacecraft Beresheet crashed onto the moon surface Thrusday, but the project is not destined to end there. Morris Khan told reporters "We've started, and should complete the mission.

Beresheet project engineers worked to understand what had gone wrong in the final, fatal seconds before the spacecraft crashed. Ofer Doron, director of Israel Aerospace Industries (IAI) described the dramatic moments trying to save the project.

"We identified a problem with one of the failed acceleration sensors," Doron explained. "It caused problems on the spacecraft's computers and shut down the engine operating at maximum power to stop the spacecraft. The crew dispatched a re-boot order to restart the engine, but it was too late" he said.

"NASA has expressed regret over the failure of the Genesis mission to land on the moon, but we commended spaceIL for its privately funded mission to orbit the moon.

Costing one hundred million dollars, Beresheet was the cheapest spacecraft to date, to successfully orbit the moon, An achievement only six other countries can claim

Millionaire Morris Kahn told Israeli media that in light of the support he has received from all over the work, a new Beresheet project will be launched. "We must complete what we've started" Kahn said.