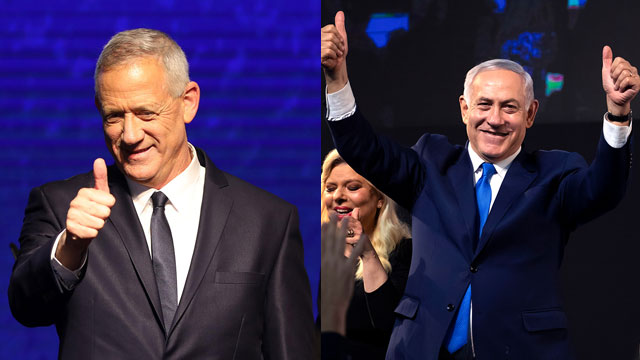 After the final results of the general elections held last week were released, it became obvious that a national unity government could not be formed.

There's no balance of power: Prime Minister Benjamin Netanyahu's Likud party - along with its spin-off, Kulanu - won some 40 Knesset seats, while Benny Gantz's Blue and White party has only 35 seats and no spin-off parties to help them. The only way Blue and White can enter the government is by joining forces with Netanyahu, where Gantz would serve as acting prime minister, with Yair Lapid as foreign minister.

There is, however, no point and no interest in establishing such a government, because Israel is not currently facing the kind of challenges and crises that would require an urgent entry of an opposition into the coalition government.

We are not on the verge of economic collapse and we’re not in a midst of a war (like we were, for instance, in 1984, when a coalition government was established as part of an agreement between Likud leader Yitzhak Shamir and Labor’s Shimon Peres amid the First Lebanon War).

The economy is stable, and the budget reforms the state has to carry out are moderate in scale. The security is also reasonably stable, and Israeli military is not currently waging a ground war on enemy territory.

There are no deep political, social or ideological rifts to mend by forming a unity government. The 2019 elections campaign was conducted - quite surprisingly - without violence, without expression of hatred or ethnic and national incitement. This indicates our society is on the mend and there’s no need to resort to a “unity” drug.

And there is, of course, the issue of interests. Netanyahu's interest is to form a coalition that would protect his position as prime minister after an indictment is filed against him on multiple corruption charges (or even prevent the indictment from being filed altogether). The presence of Blue and White members in his government - especially Gantz and Lapid - would undoubtedly bother the prime minister.

Gantz, on the other hand, wants to serve as prime minister instead of Netanyahu, and entering a coalition government would not only distance him further away form his goal, but also undermine his political and personal credibility.

Is it possible that a unity government is required in light of what US President Donald Trump is preparing in his peace plan known as the "deal of the century?" The answer is clear: Trump's peace initiative will not bear any fruit. If, however, a miracle happens and Trump's advisers will come up with a viable plan that would result in some kind of agreement, the unity government will fall apart.

The unity government is also unwanted when it comes to the two - maybe biggest - winners of the April 9 vote: Kulanu leader Moshe Kahlon and Moshe Ya'alon from Blue and White.

Kahlon is expected to continue his tenure as finance minister, even though his party has won the trust of only some 3.5% of Israel's citizens, and it's in his interest to oppose the expansion of the coalition.

Kahlon's achievement, however, pales in comparison to that of Ya'alon. His Telem Party didn’t stand a chance of passing an electoral threshold, yet he still managed to be placed at the top of the Blue and White elections list, while also bringing along some of his friends, who are sure to be decent MKs in the next parliament.