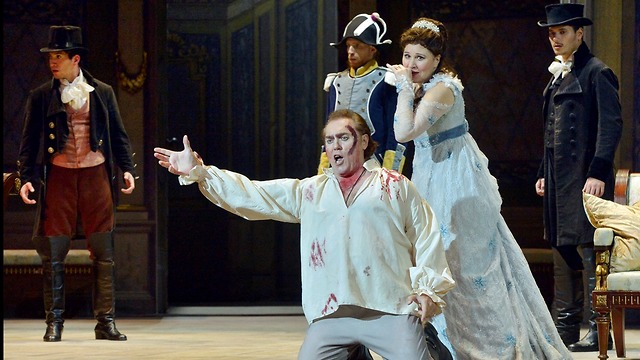 A spectacular reconstruction of the original 1900 performance - a tragic tale of love, jealousy and death by Italian composer Giacomo Puccini

The Israeli Opera debuted a spectacular reconstruction of the original 1900 production of Tosca in Rome, a melodramatic and tragic tale of love, jealousy, corruption and death.

The year is 1800. The location, Rome. Set against a background of the Napoleonic wars, Tosca is a renowned female opera singer and lover of the painter Mario Cavaradossi. The couple's fiery love for each other is evident by the way they express themselves in the first scene. But the police chief Baron Scarpia jails and tortures the painter and ultimately brings about his death.

What Scarpia really wants is to have his way with Tosca, and he offers to spare Cavaradossi if she accedes, which she eventually does, unable to bear her love's cries of pain. But Tosca has a plan and upon receipt of the letter of reprieve, she plunges a knife into the jealous Scarpia's heart, killing him. But it is all for naught and despite Scarpia's promise, Cavaradossi is executed by firing squad and a grief-ridden Tosca plunges to her death.

The show is replete with constant tension between unadulterated love and sadistic lust; naïve faith and pious fanaticism, all wrapped up in religion and politics. Although the narrative seems exaggerated and improbable, the brilliant music of Giacomo Puccini (1858-1924) transforms it into a believably touching, human drama.

Tosca's tragic death plunge, her cape fluttering behind her like a bird's wings, is not surprising considering that Puccini kills off all the heroes in his operas, such as Madam Butterfly or Mimi the seamstress in La Bohème. All those characters are totally devoted to the object of their love, even if it means death.

The fact that the protagonist, Tosca, is an opera singer adds a level of complexity to the opera and she plays the performance of her lifetime, up to her death, brilliantly. She choreographs the final execution scene as if life itself is a show, while unbeknownst to her, the show is in fact cold, hard reality.

Tosca has been a success since its first debut 120 years ago. It is one of the most commonly performed operas and its arias are considered to be some of the best of the genre.

In the second act, Tosca sings Vissi d'arte, vissi d'amore (I have lived for art, I have lived for love). She finds herself in the presence of the police chief who demands she submit to him in return for sparing her lover's life. She is in crisis; she does not understand why she — whose whole life was devoted to art, love and faith — deserves this cruel fate.

She cries out to God: "I lived for art, I lived for love, I never harmed a living soul! With a discreet hand I relieved all misfortunes I encountered. Always with sincere faith my prayer rose to the holy tabernacles ... In this hour of grief, why, why, Lord, why do you reward me thus?"

In the third act, as he stands across from the execution squad, Cavaradossi chooses to focus on love. He sings E lucevan le stelle:

"And the stars were shining,

And the earth was scented.

The gate of the garden creaked

And a footstep grazed the sand...

And fell into my arms.

While trembling I stripped the beautiful form of its veils!

Forever, my dream of love has vanished.

That moment has fled, and I die in desperation.

And I die in desperation!

And I never before loved life so much,

Loved life so much!"

Some of the world's greatest tenors have handled this great aria including Placido Domingo in Rome in 1992 and Luciano Pavarotti (1935-2007) in NY at Madison Square Garden.

The beautiful production was an amazing reenactment of the original production of the opera in 1900. The stage sets and costumes were meticulously reproduced based on the opera archives in Rome.

As with the greatest classic operas, the depth perspective on stage was impressively accomplished on all three sets: the church, the police chief's room and the courtyard overlooking the Tiber River where Cavaradossi was executed.

While the singing was performed beautifully and accurately, the main roles were played by foreigners, not native Israelis. Georgian soprano Iano Tamar played the role of Tosca very convincingly. Argentine tenor Gustavo Porta played Cavaradossi with emotion and vigor, while Romanian baritone Sebastian Catana, who played Scarpia, managed to stunningly convey his gentlemanly side as well as his sadistic streak.

The sold-out production ran from March 28 to April 12. A new production, The Passenger by Mieczyslaw Weinberg, about women prisoners transported to Auschwitz where they try to remain human and humane in a place that has lost all human form will debut on April 30.